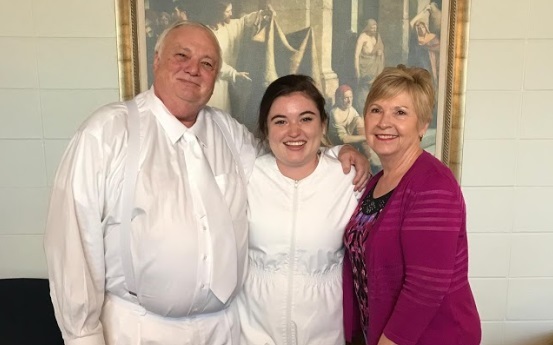 Why Being LDS Is Worth the Sacrifice: One Convert's Remarkable Story, Message About Miracles

At 13 years old I remember sitting in Sunday School with the girls and boys my age. I was in Glendale, Arizona, and my great aunt and uncle had brought me and my brother to sacrament meeting. The teacher asked us to define the priesthood, and my poor brother and I—with our Southern Baptist background—couldn’t actively participate. We heard words like “authority,” “blessing,” “prophet,” and we were hopelessly lost.

My brother told me when we arrived back at the house that he was happy to have done the polite thing by attending church, but that “that other book doesn’t make any sense, so we ought to just stick with the Bible.” I shrugged, not knowing what to say, and managed a “Mhm.” I didn’t want him to know that it was making sense to me.

Years passed as I attended school in Southeast Texas near the Louisiana border with a large community of Mormons. One in particular who befriended me was Rachel, a girl with a smile that could make anyone feel like she had known them forever. Looking back with my knowledge of the gospel and its fullness, maybe she did, in fact, know me. She and I graduated high school in 2015 and moved to College Station to pursue degrees at Texas A&M University.

Immediately I was invited to attend sacrament meetings. I was excited to have the freedom to attend without my family meddling, only to have my mother call during Sunday School to reel me in a bit. Her words scared me into leaving, so I spent a year and a half avoiding the Church altogether. I was ashamed to speak to my bishop or the members because I didn’t want to give it up, but I had bought into the lie that maybe the Church was trying to hook me on something that wasn’t true.

As I tried to live my life apart from the full truth, I settled for the half-truth. When it wasn’t filling the gaps in my heart, I began to slowly allow sin to creep in the cracks that I wouldn’t let Heavenly Father fill.

In the meantime, I watched Rachel get married to the man she loved in the temple and saw them dance at the reception. I thought instantly, “This is what I should be waiting for, not some fling I scraped off the bottom of the Tinder pan.” I sought Christ more than ever after that, and for a while things went great, but I quickly found myself stressed and struggling to be the young woman I knew I could be. And that, my friends, is when God answered my prayers.

In May of 2017, I answered a knock on the door to see the newest elder missionaries in the area. They were surprised at how much of the gospel I knew, and I just stood there like, “Ha! If you two only knew.” They then offered me a new Book of Mormon since I had disposed of the one from freshman year, and they said a prayer before going on their way.

I read the Book of Mormon diligently and would ask Rachel if I had any questions. Meanwhile, I had registered for the fall 2017 semester, and one of the classes I ended up in to fulfill my English minor was (get a load of this) ENG 365, The Bible as Literature. As I studied the Bible over again, memories of lessons from the Book of Mormon flooded my brain.

From there, my journey sped up. Looking back I see how fast it all happened, so I can understand my parents’ reactions, but at the time, all I could feel was the hurt my parents experienced and the pain it caused me. When I called my mom to tell her I was getting baptized, she couldn’t bear to speak to me and told me she was too busy at work to have this conversation. Shortly after she hung up, I received a text from her suggesting that I admit myself for counseling. She said, “I didn’t raise you well if this is the path you are taking.”

My mom is an amazing woman. After 10 years as a teacher, she became an administrator and has continually moved up in her field for the last two decades. She can lift you like no other, but like any school administrator, when she is disappointed in you, it is worse than a screaming match. When she reacted to my decision with the deepest disappointment, I lost it. My throat was closing up as I burst into a loud and embarrassing brokenhearted sob.

My father later called me to inform me that I would be coming home this weekend to leave my Aggie ring and car with my parents. They would also be pulling all financial support, including college tuition. Their reasoning was, since I was big enough to make an adult decision such as baptism, I was big enough to enter adulthood full time.

I had a choice to make. I could give in and wait to do what I wanted to do until I graduated from college, pleasing my parents, or I could cling to the rod, pleasing Heavenly Father.

I chose to be baptized on Friday, October 6, 2017 at 6:00 p.m. in College Station, Texas. Since making this decision, Heavenly Father has blessed me with enough finances, rekindled friendships, a faithful relationship, and a sense of peace that couldn’t come from anywhere else.

In preparation for this joyous event, I wrote the talk below:

Howdy! Thank you all for coming. As you know, some of my family is here, but not all of them. It hurt when I knew they wouldn’t support me. This was made clear to me when my parents threatened to stop paying for classes at A&M, for my car that gets me to two jobs, and possibly even health insurance. Then, my grandmother called a few days ago. She spent 20 minutes just crying through her pleas for me to postpone, saying I was falling into something that wasn’t true, and that I must not care enough about her to have told her sooner.

As she cried, tears began rolling down my own face. I listened to the words of one of the wisest women in my life, and I began to wonder if I was giving up something as big as family, which Heavenly Father loves so much, for something that maybe didn’t matter that much after all. I realized I was in a room at the College Station Institute building with a white board and a marker. As she continued to cry and pour her heart out, I felt prompted to make a pros and cons list, as cheesy as that sounds.

I began with the cons. Those were easy. They were staring me in the face, those immediate and painful issues. I could think of two: 1) “Possible debt” and 2) “No parent attendance.” Once I figured I was done with the cons, I moved quickly to pros. . . . I began writing and my hand just starting flowing down the board until it became uncomfortable to write at the bottom. I had to get on my knees, but I continued with gifts like “the Holy Ghost,” “knowledge,” “ability to perform ordinances,” and “feelings of love and peace.” Soon I had five times more content in the pros than I did in the cons. All the while, my grandmother was still speaking. 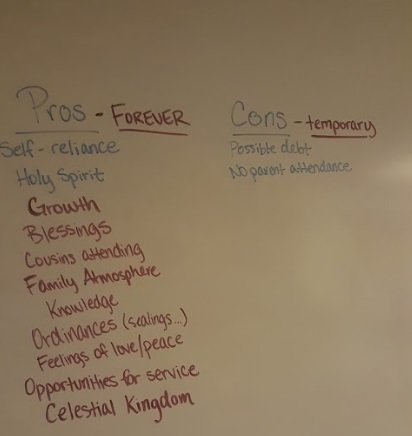 My cons list could very well follow me for the rest of my life, but at the very worst, those cons will stop when I die if not sooner. But my pros list? Its benefits and rewards go with me forever and ever. They will last for eternity. I have eternal joy in knowing that everything on my pros list will be there when I reunite with Jesus Christ.

I want to close with a thought that came to me just the other day, as I was pondering what I might say here today. I love the song entitled “No Longer Slaves” by Bethel Music. If you haven’t heard it, look it up, and my hope is that you will love it as much as I do. There is a lyric in the bridge that sings, “You split the sea so I could walk right through it.”

What sea do we know of that split for a higher purpose? The Red Sea, right? The story of Moses! As I was singing this song to myself that day, I thought about how the Red Sea is fairly big, because, well, it’s a sea. We, as smart and logical adults, can safely assume that Moses and his people were not the only ones at the sea that day. Sure, the book of Exodus hones in on the escape from Egypt, and the loss of Pharaoh and his court in the waters as they rushed back together, but it is highly likely that other people and families had set up camp on the coast for food and water needs, and that fisherman were in their boats for their livelihood. Moses and the Israelites knew what God was doing. Pharaoh and the Egyptians knew they were fighting to get their slaves back. But the people along the coast and in their boats had no idea. They saw their fires extinguished by the waters slapping the land and they saw their boats rocking, disrupting any and all chances of catching fish that day. These people likely were annoyed, confused, and had a lot of questions.

But, here is the beautiful thing to remember. Heavenly Father cannot split the sea without rocking some boats. His hand and His majesty affect us all, and your actions as His disciple will do the same. He did a mighty thing through Moses that day, but not everyone understood the magnitude and power. They just knew their boats were rocking. I like to imagine my parents are the same way. They don’t understand, but my prayer is that they will someday.

Today, just as in the days of Moses, God did a powerful work through my uncle as I was baptized. From that alone, I can say proudly and with full confidence that the word of the Lord is true, both from the Bible and the Book of Mormon. I testify today that the word is for everyone, even if they don’t know it yet. It is beautiful, it is indescribable, and it touches us all, and I say these things from the bottom of my heart in the name of Jesus Christ.