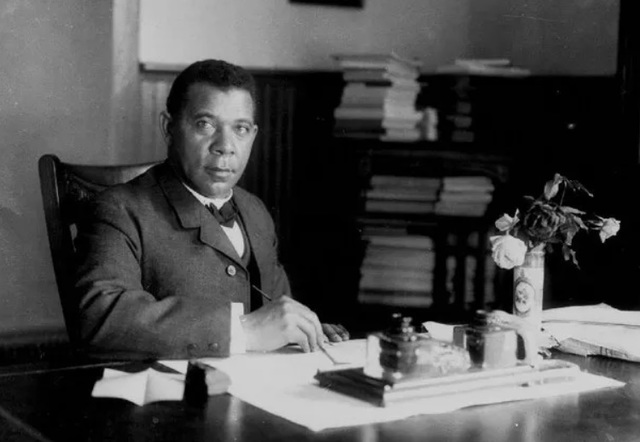 In April 1913, Booker T. Washington did The Church of Jesus Christ of Latter-day Saints a favor.

Following a two-day visit to Utah a few weeks earlier, the prominent African-American author and educator wrote a series of newspaper articles that praised Mormons for their intelligence, cleanliness, and industry. Washington also drew attention to the fact that there were about one thousand black Latter-day Saints living in Utah, and as far as he could tell, the practice of polygamy was fading.

It was almost as if Washington was doing a little public relations work for the LDS Church, said W. Paul Reeve, the Simmons professor of Mormon Studies at the University of Utah.

"It seems to be quite generous in terms of his appraisal of the Latter-day Saints," Reeve said.

A look back at Washington's writings and experience in Utah might hold relevance as the LDS Church celebrates the 40th anniversary of the 1978 revelation on the priesthood this June.

Washington's 1913 trip to Utah was arranged after the superintendent of Salt Lake City schools visited Washington at the Tuskegee Institute in Alabama in 1911 and invited Washington to come and speak, Max Mueller, an assistant professor of classics and religious studies at the University of Nebraska, said in a 2013 Deseret News article.

"What we have is a mutual admiration society between Booker T. Washington and the Saints in Utah," Mueller said in the article, even though it came at a time when the church restricted members of African descent from receiving the priesthood or temple blessings.

During his visit, Washington spoke to students and educators at the University of Utah, as well as the African-American community. Within a few weeks, Washington wrote about 2,000 words describing what he learned in his visit to Utah for the New York Age, then a leading African-American publication.

In one New York Age article, published on April 17, 1913, Washington described a warm reception from "some mighty interesting people." He wasn't interested in discussing the LDS faith but applauded the Mormons for making the "desert blossom as a rose."

"I have never been among a more intelligent, healthy, clean, progressive, moral set of people than these people are," Washington wrote. "Whenever one finds a Mormon colony there he finds evidence of hard work and wealth."

This is a telling statement given the time period, said Reeve, author of the book, Religion of a Different Color: Race and the Mormon Struggle for Whiteness.

"(Washington) seems to be aware of the way in which Mormons in the 19th century were denigrated as the opposite of all those things. They were seen as unintelligent or dupes, stupid, not healthy but in fact sickly, dirty, regressive, and polygamy was giving rise to a degenerate new race," Reeve said. "Washington seems to be arguing against the longstanding way in which the Mormons had been construed in the 19th century."

In the same article, Washington drew two parallels between African-Americans and Mormons: First, for the persecution they had endured; and second, for how they had been misrepresented before the world.

While Mormons were never enslaved or treated the way African-Americans were in American history, identifying those two things show a significant amount of empathy and willingness to listen to people who may be different from you, Reeve said.

"He’s speaking from a place of empathy," Reeve said. "He knows what it’s like to be misrepresented and he advocates for actually getting to know the people you are trying to understand instead of speaking without information. His visit seems designed to do just that."

Washington found about a thousand African-Americans living in the Salt Lake Valley, including many who were pioneers.

"I think it will interest my readers to know there are colored Mormons in Utah. I met several of these," Washington wrote. "I am told that the Mormon church treats the colored people well."

As surprising as that might have been in 1913, Reeve thinks people in the 21st century might be equally surprised to know how many faithful African-American Saints were part of the Church before the 1978 revelation (Official Declaration 2).

"More often than not people are afraid of talking about or are unaware of black Latter-day Saints before 1978. The assumption is that they only started to exist after 1978," Reeve said. "But that shouldn’t mean that those black Latter-day Saints get completely erased from Mormon history. I think Washington is drawing attention to the fact that they were here, they were part of the pioneer experience, and it sounds like he met a few of them."

In another article, dated April 23, Washington lists the Articles of Faith, followed by this statement: "I am not a Mormon and have no immediate intention to become one, I am free to say that there is a good deal in this creed that appeals to me. If everybody in the world can live up to it."

Washington saw something in the Mormons worthy of emulation, Mueller said in the 2013 Deseret News article.

“Booker T. Washington wanted heaven on earth, especially economic bliss. (He was hoping to) create an independent, self-sufficient, respected community of industrious, conservative people," Mueller said. "So he looked to the saints for a model of that type of community."