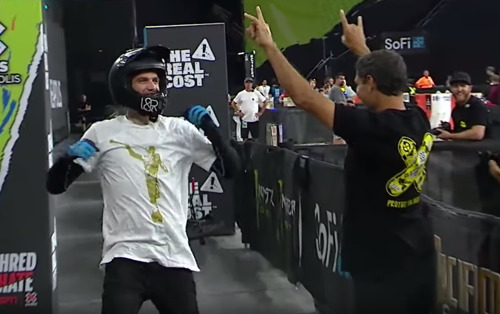 Why Did an Angel Moroni Appear at the 2019 X Games?

Why did Angel Moroni drop down a 73-foot ramp, jump a 50-foot gap, and land a triple tailwhip on a 27-foot high quarter pipe last month?

Because his image was stuck to the shirt of two-time X Games gold medalist and Utah-native Colton Satterfield.

Satterfield, a professional BMX rider from Salt Lake City, made his 13th X Games appearance in Minneapolis on August 2, where he competed in the BMX Big Air competition.

Satterfield put down a solid first run, earning him a seventh-place finish in the event. It was his apparel, however, that likely caught the eye of those familiar with the golden statue that usually adorns the tops of temples of The Church of Jesus Christ of Latter-day Saints.

It wasn’t the first time Satterfield donned the image in the competition, either. At the 2017 games he wore the same shirt at the same event, only to have medical professionals cut it off after he broke his clavicle attempting a double flair on the quarter pipe.

“Last year the EMTs cut off my Angel Moroni shirt in the ambulance after my first run. It is sewn back together and ready to go,” Satterfield wrote in an Instagram post ahead of this year's event.

Last year the emt's cut off my Angel Moroni shirt in the ambulance after my first run. It is sewn back together and ready to go. 💪 LIVE ESPN tonight. 8:30 pm Idaho/Utah time

Satterfield, a member of The Church of Jesus Christ of Latter-day Saints, has been vocal about his return to the faith. He recently self-published an autobiography titled, Restore: "True wisdom is humility before God", in which he describes being “done” with the Church by age 16 and having a series of “incredible miracles” that led him back to his spiritual foundation.

In 2017, the Deseret News reported Satterfield pulled out of his sponsorship with Monster Energy because of “personal religious reasons.” The brand is a coveted sponsorship among professional action sports athletes.

“Getting such an energy drink sponsor is a big achieving step in action sports; they provide more than just financially, they help their athletes in many ways,” Satterfield said in a statement at the time. “The decision was not a light one by any means.”

Lead image a YouTube screenshot of Colton Satterfield celebrating his first run in the BMX Big Air event at the 2019 X Games in Minneapolis.