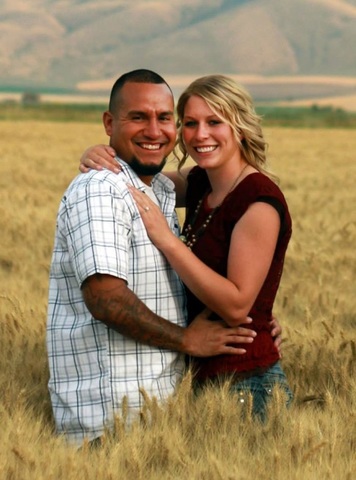 My husband and I weren’t always “my husband and I.” We both have very different pasts that only God could bring together. I grew up in the Church while Victor, my husband, grew up in the streets. I enjoyed playing sports, being involved in clubs at school, and spending time with friends and family. Victor enjoyed using drugs, being involved with women, and utilizing friends and family. By the time I graduated I’d gone to state track meets, been the Laurel class president, and had a boyfriend that was serving a mission. When Victor graduated, he’d gone to jail, was now a father, and had a mission to be on top. I grew up in Burley, Idaho. Victor grew up in Las Vegas, Nevada. So how did our paths collide?

A year after graduating high school I decided I needed to get out of Burley for a little while and decided to apply to be a nanny. I got a job in New Jersey with a wonderful family and spent the next year of my life learning and growing in all aspects of life, but mostly, I learned how to build a relationship with my Heavenly Father and Jesus Christ.

The ward I attended was made up of mostly converts to the gospel and one day I heard a testimony of an investigator that changed my life forever. This man had just started missionary discussions and got up to bear his testimony of how true the Book of Mormon is and how it had changed his life. The Spirit was so strong, and I’d never heard such a powerful witness of the Book of Mormon. However, that spirit soon changed when he said the word “but.”

“But, the Doctrine and Covenants is not true” was the next thing out of his mouth, and everyone in the chapel was flabbergasted.

“Don’t just take my word for it, though. I encourage you all to go home and pray and find out for yourself that the Doctrine in Covenants is false.”

Growing up in the gospel I had never had these thoughts before and I couldn’t believe it. What else had I been missing while going to church all these years? So I decided that from then on, I was really going to start paying closer attention to the things I heard on a regular basis at church and try to grow my testimony.

After I did that, I truly started to see how the gospel and the Atonement changed peoples’ lives and how it was changing mine! I watched as people let Christ change their lives from being members of a gang to members of The Church of Jesus Christ of Latter-day Saints and finally gained my own testimony that this Church is true.

From the age of 10, Victor grew up in the streets of Las Vegas, Nevada. His mom worked hard to keep food on the table, but as a result, she wasn’t home much. This left Victor and his sisters to fend for themselves and really learn the ways of the world. He started smoking, doing drugs, selling drugs, drinking, being promiscuous, and stealing in his teenage years. By the time he had turned 18 he had fathered a son, was on the fast-track to jail, and was living a life far from anything I could’ve ever imagined.

A few years later, after having another son and a set of twins, Victor landed himself in prison with a two-and-a-half- to five-year sentence.

While being locked up, Victor started to move up the “ranks” and soon found himself doing all the dirty work around the prison for his “clique.” One day, after he had completed another task, he was told he could receive his prison tattoos, so they tattooed his arm from shoulder to wrist.

He realized that he was scared. Not of anyone else but of who he was becoming and what he would become if he continued down this path. That night he said his first prayer that went something like this; “My mother’s God, I don’t know if you’re there, but if you are, I need to ask for your help. If you will keep me safe and out of harms way for the rest of my sentence, I promise that I won’t go back to the lifestyle I’ve been living. I promise I won’t go back to the abusive relationship I was in, and I promise my faith in you will never shake.”

A short time later Victor was told he was moving to a new place where he would be able to “rest” and not have to be involved in dirty work anymore. Victor knew God was there and that he had to now hold up his end of the deal.

When Victor got out of prison, he moved to Burley, Idaho, where his mother had moved. While he was working for a construction company, there was a pesky 18-year-old kid who wanted to be Victor’s friend.

Victor wasn’t interested and thought, “What can an 18-year-old kid who has no life experience do for me?”

It took Victor a little while to realize that this kid was the answer to his prayer and that he needed to give him a chance. So, one day when he was asked if he wanted to go to “Feed the Flock” for FHE, Victor said sure. “Ya’ll gonna go feed the geese or something?” he asked.

From that time on, despite his tattoos, his eyebrow piercing, his gauges, and the scent of smoke that followed him, he was accepted into the singles ward. Not long after he started going to activities, he started meeting with the missionaries and had a baptismal date set for March 9, 2013. 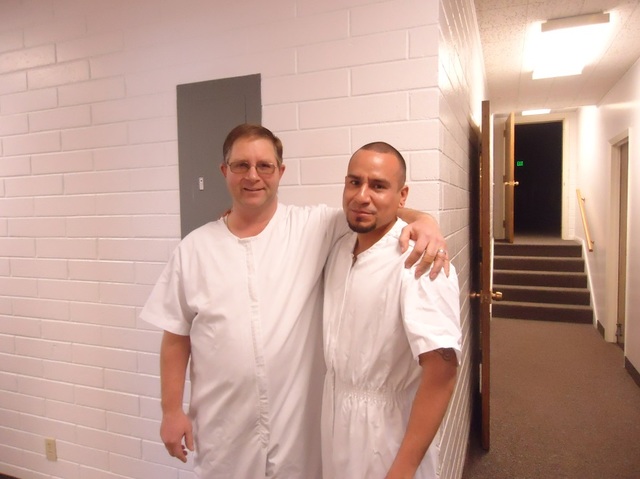 Minutes before Victor was to get baptized, he looked in the mirror and saw his gauges still sitting in his ears. He realized that if he truly wanted to change and have a fresh start, he needed to let go of all of his past. So he took out his gauges and walked into the water. As soon as he arose from the water, he said, “Now get me out of this filthy water!” And he’s never looked back since.

Victor and I first met about eight months after he got baptized when he shared his story in my singles ward’s sacrament meeting. It had been years since I’d been home from New Jersey and hadn’t heard a story like his in a long time, so I approached him after and simply told him, “Thank you.”

We became great friends over the next few weeks. When he asked me out on a date my mom asked me if I saw a future and I assured her that we were just friends. Six months later, Victor proposed and we were sealed in the Idaho Falls temple on September 12, 2014. 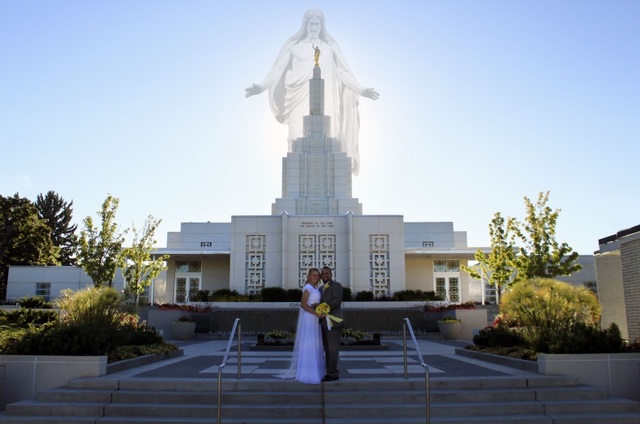 That day I didn’t just become a wife, I became a stepmom to four awesome boys. I was pretty nervous to take on that title not because I didn’t want to be a mom, but I was worried what people would think. “A 22-year-old with four stepkids! What was she thinking?” “He’s a felon and an addict!” “Is she sure about what she’s doing?” “Has he really changed, or will he fall away?”

All these comments and more have been made since we’ve been married and it’s been hard. I can’t tell you how many times I’ve cried after hearing comments about how Victor shouldn’t be at church because he has tattoos or how Mexicans shouldn’t marry white people or how he will fall back into addiction. But despite all of the negativity, we’ve never once felt alone or felt like we weren’t accepted by those who truly understand the Atonement. Despite the negative comments, there has always been an opportunity to share the gospel with those who don’t yet understand how real the Atonement is.

Because of Victor’s past, I have four beautiful boys to be a mom to while we’ve been struggling to have kids of our own, we’ve had opportunities to share the gospel and give hope to those struggling with addiction and their families, we’ve been able to grow and learn from different perspectives because we were both raised so differently, we’ve been able to let God be the head of our marriage and guide us in the directions He wants us to go, and we’ve been able to see miracles as we continually convert to the gospel every day.

I’ve often told myself that I didn’t choose an easy life, but I did choose the life I want. Not just the life I want on this earth, but the life I want forever. I want to be with someone who will help me grow and become a better me. I want to always remember that this life isn’t about getting to the end but about growing and learning and becoming like our Father in Heaven. Jesus Christ came to this earth and showed us that life was not supposed to be easy and that hard things would happen. He showed us how to love, to teach, to learn, and how to face even the hardest of trials. 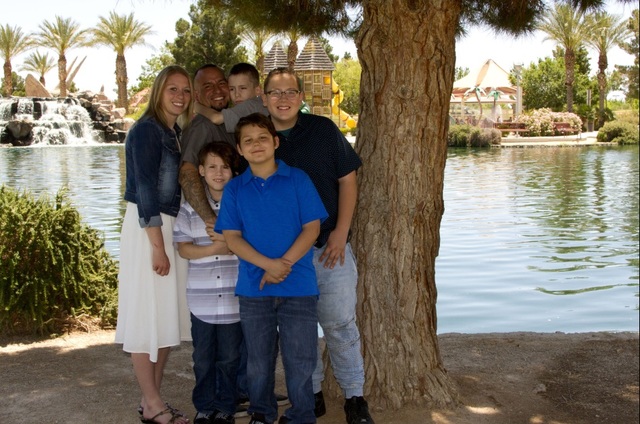 My life is nowhere close to where I thought it would be or where others told me it should be. Growing up I was taught to marry a returned missionary. No one ever told me that my returned missionary would be a man that went on a “mission” to sell drugs and “returned” from prison to be a better man. No one told me that I would have a family of six the day I got married. No one told me that it was okay to marry someone with tattoos. No one can tell you what your future holds or how you need to live your life. The Lord has a plan for each one of us that only He can prepare you for. Don’t let the influence of others stand in the way of receiving personal revelation from the One who knows you best. I know that the Atonement of Jesus Christ is real and that He not only provided it for us to use, but He also showed us how to use it. I know that the Lord doesn’t give us any challenge He can’t help us learn from. I know that learning is the only way to become like Him. I know that my life isn’t the way I planned. I know it’s even better!