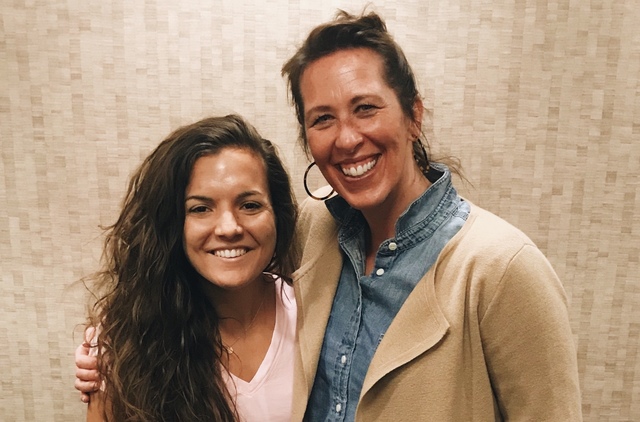 Emily Snyder was raised a member of the Church with a dream of being a mother just like her mom. However, as she got older, she realized that her life may end up presenting her with a different set of circumstances and opportunities. Now a graduate of Columbia’s MBA program who has previously worked closely as an assistant to both Clayton Christensen and Julie B. Beck, Snyder is employed in Waco, Texas, where she works for Chip and Joanna Gaines’ Magnolia as the company’s chief of staff.

In this excerpt, Snyder shares beautiful insights about what she has come to understand about our efforts to find what God sees in us. She also shares some lessons she has learned from each of her bosses.

Note: The following excerpt has been edited for clarity.

Emily Snyder: I hope I'm not alone in this feeling of often not feeling like I'm enough, enough to get that job, enough to have that friend want to interact with me, enough for whatever. And I wish I could pinpoint the moment that the thought came to me, but I just I caught myself feeling like, so today I'm not enough. What the word "become" tells me is that today I'm not enough to have God with me, to have all those things. Because I have to do something in order to become worthy of that. Or of XYZ, whatever it is, that there's work to do, which I'm not opposed to work. But it infers that today I'm not enough. And I don't know that I believe that. I was wrestling at one point of my relationship with God and who I am. And the term of Jesus Christ being called I Am. And this concept of . . . like, if God doesn't believe in time, I mean, if God isn't constrained by time, then he looks at Emily, not in Emily at 40 years old, almost 41, in this season of life. He's seen Emily in all my eternalness. He's seen all that I am in my premortal, my current, and my postmortal existence, and He's looking and viewing me as my greatest self, my most glorified Emily. And if He sees me that way, then how do I choose to see myself that way? And are these opportunities in life not things for me to become? But are they things for me to then uncover and discover who He already sees and knows me to be? Because if I'm already a daughter of God, He already sees me as that. I don't have to become His daughter. I am. He loves me completely. And all these opportunities of growth and progression, and heartache, and brokenness are not things that I have to become something through. But they are simply opportunities for me to see who He already sees me to be, to see the strength that I already have. And for me to trust myself like He already trusts me, to know I'm stronger enough to do something, to know that I'm wise enough.

MJ: I love that. . . . We mentioned at the beginning of this interview all the people that you've had the opportunity to work with, and you mentioned feeling just tremendous gratitude for them. But how would you say that the people that you've worked with . . . the lessons you've learned from them, have continued to bless your life? And maybe like the biggest lessons that you've learned from each of those people? Any thoughts on that?

ES: Oh golly, that's hard. I think the unique thing about working with some well-known men and women is that their thoughts have been recorded, oftentimes, and so I get to go back and reread them. Whereas this principal that I worked for, love him dearly, I don't know that he has any of his life's lessons written down that I can refer back to. A teacher that I worked with, she's yet to write a book, you know, or to write an article. So I, I just have to rely on my own memory, and that's not always the best thing to rely on. And so the nice part about working with these people is that I not only can refer back to some written writings of their thoughts, but then it triggers also so many of the lessons I learned while they were developing those or that I got to be a part of the process as some of those things were being developed. And so they have been so influential in that way.

Key lessons from some of them . . . Sister Beck I think so deeply taught being bold, and her testimony and her understanding of the doctrine, that just boldness, so she would talk about President Benson and Spencer W. Kimball and just the boldness of their language as they were leaders in the Church. And that has always stood out to me with her boldness. I also, getting to work, watching her wrestle through a couple of things, realizing being a leader is not something that I think most people once they get there ever desire. And I don't even know if along the path that's something that they desire. But that's just kind of where they're taken. Because you will never make everybody happy, and I think that is a very lonely, lonely place. And I've seen that with all of them of the loneliness, that being a leader in any right is, it is lonely. There's not very many people that understand what Chip and Joanna Gaines are going through. It's really hard to find friends that are in that same sphere. And I feel like it is a very, very lonely, lonely space to be in. With Clay specifically, I feel like I learned to just keep thinking and to think about things from a slightly different angle and to figure out deep principles about what I'm doing, that just because it worked for Morgan's life doesn't mean it's going to work for Emily's life. But what are the deep underlying principles that are at play? And much like Elder Bednar, there are doctrines and there are principles in their applications. I watched that with Clay. I watched that in so many of the ways that he taught of there are deep, deep principles and just the way life works. And how you apply that is going to be completely personalized. So I love that. With Chip and Joanna, I haven't been there oodles long, like I've only been there for almost a year, and so I am amazed at their tenacity, of fighting for the things that they strongly believe in and that they are going to risk when they feel like it is the right risk to take and they desperately want to embrace as many people as they possibly can, and at the same time hold to the values and their family as priority. That has been beautiful that they're able to accomplish their dreams and keep their boundaries.

Read more about Emily and her road to Magnolia here.