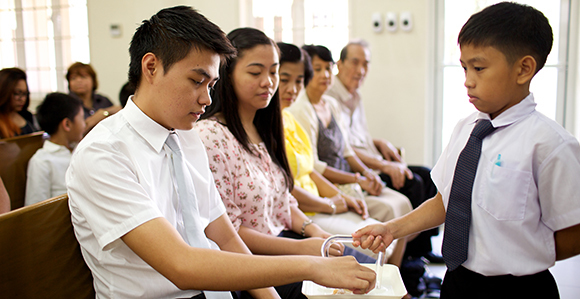 As a Sun Beam in sacrament meeting, eyeing the bread tray as it made its way closer and closer to you, you probably didn't notice what hand most members were using to take the sacrament.

Brimming with the false sense of independence only a 4-year-old can possess, you reach eagerly for the bread once it comes to you with your left hand only to have your mom or dad whisper in your ear, "Use your other hand."

You obey without a second thought. But after a while, you begin to wonder: why do we as members take the sacrament with our right hands?

This could be because of the symbolism of the right and left hands. Scripturally, the right hand is a place of honor and a symbol of covenant keeping, as seen in Mosiah 5:8–9: "therefore, I would that ye should take upon you the name of Christ, all you that have entered into the covenant with God that ye should be obedient unto the end of your lives.

"And it shall come to pass that whosoever doeth this shall be found at the right hand of God."

On the other hand, the word "left" comes from the Latin word "sinister," meaning unfavorable or unlucky. These meanings are sometimes used in the scriptures, like in the case of Matthew 25:33: "And he shall set the sheep on his right hand, but the goats on the left." The sheep, in this case, are seen as preferred to the goats.

But this symbolism of left and right didn't translate to the passing of sacrament until the 1930s when the Great Depression was in full swing. According to an Intermountain West Journal of Religious Studies article by Justin R. Bray, "Excessive Formalities in the Mormon Sacrament, 1928–1940," the preference was popularized after the Granite Stake published a directive in the Improvement Era magazine.

In the article, deacons were told to keep their left hands behind their backs "at all times" and "it is not proper to have a boy handling the sacrament with the left hand" (“Field Notes,” Improvement Era 34:7 (May 1931): 417).

In 1946, President Joseph Fielding Smith spoke out against having Deacons keep their left hands behind their backs but later clarified, "It is a well-established practice in the church to partake of the sacrament with the right hand and also to anoint with the right hand, according to the custom which the scriptures indicate is, and always was, approved by divine injunction" (Joseph Fielding Smith, Answers to Gospel Questions Volume 1 (Salt Lake City: Deseret Book Company, 1957), 154).

So although using the right hand to receive the sacrament does add symbolic meaning to the ordinance, it is not required by members. As President Nelson says, it is more important to focus on the Atonement and what the sacrament represents than which hand we take it with.