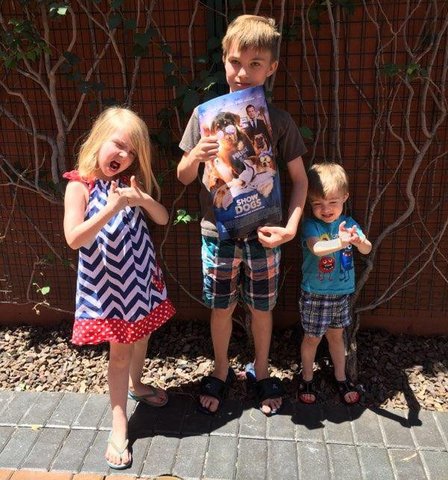 After going to see a seemingly safe kids movie with her family, LDS mom Terina Maldonado was disturbed by the messages it shared, so she decided to do something about it. About the movie, Show Dogs, Maldonado writes, "What could have been solely a fun movie for kids that would get my highest recommendation is damaged by a dark and disturbing message hidden, not so subtly between the fluffy dogs and glamorous parties of the show dog lifestyle."

That "dark and disturbing message" comes in the moments an undercover police dog infiltrating a dog show to crack open a kidnapping case has to learn how to undergo the physical inspection that takes place during the show—specifically the moment when the judges inspect the dog's private parts.

The main character, Max, and his human crime partner, Frank, practice for this moment, but Max always fights back. That's when Max is told by a former dog show champion to find his "zen place" during the inspection to keep him from fighting back.

About this moment, Maldonado writes, "During the movie, I kept thinking, 'This is wrong; it doesn’t need to be in a kids movie. Everything else in the movie is good fun except for this.' . . . With the #MeToo movement and all the talk of sexual predators in Hollywood, I couldn’t help but think this message, that is blatantly in the open for adults to see but over a child’s understanding, is meant to groom children to be open to having people touch their privates, even though they don’t want it. It gives them the idea of a 'zen place' to go to mentally when they are touched."

Dawn Hawkins, Executive Director of the National Center on Sexual Exploitation, further adds, “The movie Show Dogs sends a troubling message that grooms children for sexual abuse. It contains multiple scenes where a dog character must have its private parts inspected, in the course of which the dog is uncomfortable and wants to stop but is told to go to a ‘zen place.’ The dog is rewarded with advancing to the final round of the dog show after passing this barrier. Disturbingly, these are similar tactics child abusers use when grooming children—telling them to pretend they are somewhere else, and that they will get a reward for withstanding their discomfort. Children’s movies must be held to a higher standard, and must teach children bodily autonomy, the ability to say ‘no’ and safety, not confusing messages endorsing unwanted genital touching.”

Hawkins continues, "These two scenes in Show Dogs are essentially a sextortion scenario—where the character is told he must allow himself to be touched in his privates so that something bad doesn't happen to another character (the kidnapped panda) they are attempting to rescue. This is a textbook sexual abuser move—it would be impossible to calculate the number of times sexual abusers coerce minors into various sexual activities (everything from sending nude pictures to sex trafficking them) by using the threat of something bad happening to someone else if they don’t comply."

When Maldonado learned her daughter's favorite part of the movie was the same moment that disturbed her most, she decided to turn this potentially harmful message into a positive teaching moment for her children. She says:

"I decided to use that moment to help reinforce what we have taught our children since they were little. . . . We talked about how we never let anyone touch our private parts, what they should do if anyone tries. We reinforced that if anyone tries to touch their private parts or asks them to touch their private parts they should talk to us about that. We talked about different ways children can feel pressured to participate in those types of behaviors. A child predator is usually known to the child, rarely are they a stranger. We talked about bribes or threats, we discussed the fact that that type of behavior is not a game; we reminded them the same rules apply to kids as well as adults."

Maldonado's courage about speaking out about this topic and tact in sensitively approaching it with her kids has caused her advice to be shared in parenting groups across the web. It's inspiring to see how one mother's passion and willingness to speak out has led to parents initiating important conversations with their children.

"As a survivor of child abuse, this is something I feel strongly about and am passionate about helping others protect their children," Maldonado writes. "I also fiercely strive to give my children the knowledge and tools they need to protect themselves. Those little humans are the greatest things in the world! Children are our greatest resource."

Read the full post and Maldonado's advice for teaching children about this topic here.