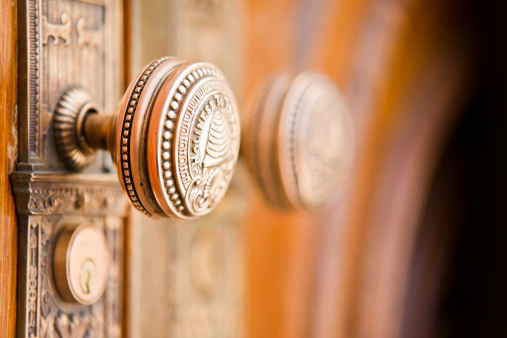 Have you ever wondered why we inscribe "Holiness to the Lord" on modern LDS temples? Read on to find out the incredible meaning behind this phrase.

What was the meaning of “Holiness to the Lord” in the Old Testament?

Basic meaning of the Hebrew. The Hebrew equivalent of “Holiness to the Lord” is written as קדש ליהוה (kodesh le’YHWH):

Figure 8. Artist’s conception of the plate of pure gold that was to be worn on the forehead of the high priest, as described in Exodus 28:36-38; 39:30

How was the phrase used in the Old Testament? Briefly, it was applied to people, not to buildings. As mentioned above, the phrase “Holiness to the Lord” is never used in the Bible in connection with the temple itself. Instead, the Israelites were instructed to engrave these words on a “plate of pure gold” that was to be worn upon the forehead of high priests who had been consecrated to the Lord’s service through sacred ordinances.[39]

To wear the plate of pure gold engraved with “Holiness to the Lord” on the forehead was a divinely bestowed honor of the greatest significance and belonged solely to the high priest. It identified the high priest with the Lord Himself.[40] To further emphasize that those who enter into the “oath and covenant … [of] the priesthood”[41] today do so in similitude of the Son of God, note Margaret Barker’s description of how the concept of becoming a son of God relates both to ordinances in earthly temples and to actual ascents to the heavenly temple:[42]

The high priests and kings of ancient Jerusalem entered the Holy of Holies and then emerged as messengers, angels [i.e., emissaries] of the Lord. They had been raised up, that is, resurrected; they were sons of God, that is, angels; and they were anointed ones, that is, messiahs. … [By entering the Holy of Holies as part of temple service,] human beings could become angels, and then continue to live in the material world. This transformation did not just happen after physical death; it marked the passage from the life in the material world to the life of eternity.

Today, those who receive the higher temple ordinances also become, in their measure, emissaries of the Lord, “saviors of men,”[43] in likeness of ancient high priests and kings — and ultimately as their Redeemer.