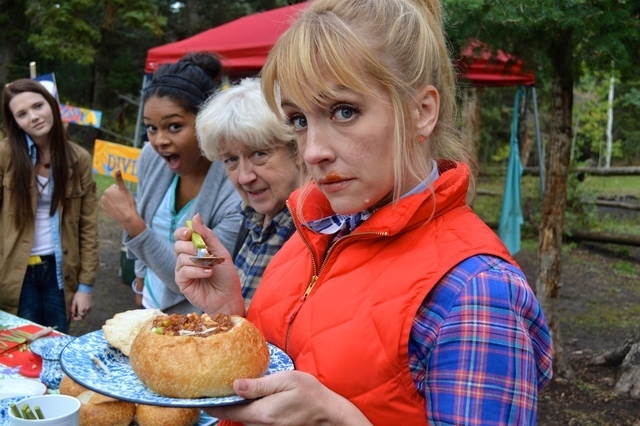 MR says: Find out why a Catholic movie producer would choose to produce a film all about the crazy and endearing adventures of girls going to an LDS girls camp. Want to see 'Once I Was a Beehive' in a theater near you? Then request it here.

An open letter to the Mormon movie-goers of Utah.

Disclaimer: I am not Mormon. You may label me as an east-coast Catholic girl, a non-member, an investigator, or even a sinner. In the fog of my college days, I met a fair-haired, blue-eyed guy who denied splitting a bottle of wine with me and took me out for ice-cream instead, because he was a member of the “Church of Jesus Christ of Latter-Day Saints,” to which I replied, “Never heard of it.” This week marked our 5 year wedding anniversary. He is still a very devout Mormon. I’m still drinking that wine (not currently), but I do attend church with him sporadically (still afraid of Relief Society), I spend my holidays in Provo, UT and sometimes I have to wash my husband’s garments, so consider me a “Mormon enthusiast.”

I am one of the producers of the Mormon-esque film, “Once I Was a Beehive” (the only non-member producer) and when my husband, Maclain Nelson (producer of “The Saratov Approach” and also the actor who plays Elder Propst ) told me he wanted to create a movie about a Mormon Girls Camp, the conversation went something like this:

Maclain
(sweetly, like always.)
Why not? The stories I hear from girls camp are hilarious and I think we can make it inspirational.

Maclain
Trust me on this one. It’ll be like “The Sandlot” with girls.

Clare
Will you give me a good part?

Maclain
Can you pull off an 18-year-old Mormon girl?

Maclain
Fine. But you have to trust my vision.

Luckily, he ignored my initial reaction and we went on to make the film. When it was finished, both the critics and I were pleasantly surprised. In fact, it is the highest reviewed LDS film in over a decade. Here are a few snippets.

“Faith-based cinema” is such a disaster on such a regular basis that it’s almost startling when someone gets it right.”
– City Weekly

“As good as the Hollywood product…” 3.5 out of 4 stars
-The Salt Lake Tribune

“Once I Was a Beehive is not only the best movie of the summer, but also the BEST Mormon movie ever made.”
-Celestial Shine Magazine

“Once I Was a Beehive” achieves a quality few LDS-themed films have managed to reach: accessibility.”
– Deseret News

Read the rest of this story at clareniederpruem.wordpress.com