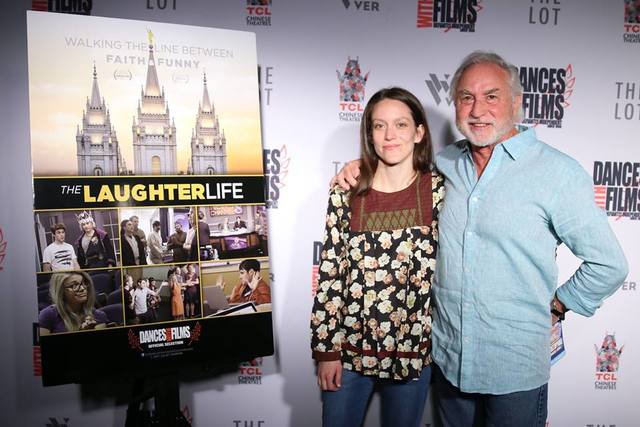 What would lead a Jewish Senior Segment Producer on The Daily Show to want to make a documentary about a BYUtv sketch comedy show?

It certainly helps that the show’s sketches have been wildly successful, garnering more than one billion views collectively. It helps that the show has caught the attention of other big names in the comedy world like Conan O’Brien and Kenan Thompson. Still, Juliet Werner’s decision to create The Laughter Life, a documentary that shows a week behind the scenes of the production of Studio C, is intriguing.

We recently spoke with Werner about the release of The Laughter Life, which became available earlier this week on iTunes, Amazon, Google, Microsoft, Vimeo, DirecTV, Vudu, and Comcast video streaming sources after being screened at several film festivals last year.

The First Spark of Interest

In reality, Studio C had Werner’s attention before it was even created. She remembers watching “Provo, UT Girls”—a comedy sketch created by Divine Comedy, the predecessor to Studio C—after seeing it on a national blog. That video, which has been viewed over two million times to date and features many recognizable Studio C faces, led Werner to learn more about the comedy scene at BYU. She discovered that the comedy troupe often performed shows in front of sold-out crowds, and hundreds of students competed for two to three spots when the troupe held auditions. She was fascinated to find this “epicenter of campus comedy” in Provo, Utah, of all places.

By the time she finally got in contact with the Divine Comedy cast, however, she found that the individual comedians she had admired had graduated from BYU and become the cast of Studio C.

A self-proclaimed “comedy nerd,” Werner ’s interest in Studio C only grew. She was curious to see how the process of creating clean comedy compared with what she had experienced on The Daily Show and as a result, joined forces with her father, Jeffrey L. Werner, who is a filmmaker and editor with experience primarily in feature films and documentaries, to pursue a project focused on the comedy show. The two contacted the BYUtv show with a question: Could they shadow the cast for a week and film a documentary? They got a “yes,” and the documentary soon became a family affair with Juliet acting as director, her father as editor, Juliet’s younger brother as the film’s composer, and her cousin as the designer of the promotional posters.

“As we worked on the film, we sort of realized that through making a film about family-friendly entertainment, we were kind of bonding as a family,” she says.

A Jewish Perspective of Latter-day Saints

Before beginning the project, Juliet knew a bit about Latter-day Saints, but only some of what she knew was accurate.

“I thought of Mormons as people who sort of stuck with their religion throughout their lives. And because the family was such a key part of it, there were ways [they found] to be religious with the family unit,” Juliet says.

Juliet found that perception to be accurate, but getting to know the show’s cast challenged other perceptions she had formerly had. For example, they didn’t take themselves too seriously. “They know how to laugh, they know how to have a good time, and life is about sharing the good times together,” she observes.

The cast, who Juliet describes as “a group of best friends,” were kind and welcoming to the Werners behind the scenes of the show, and the father-daughter duo was able to witness firsthand just how big of a deal the show is in Provo, Utah.

“I knew they had a following, but I don’t think I was prepared for what it would be like to eat dinner with them in Provo,” Juliet says. “They’re rock stars. They get approached a lot.”

Discoveries Behind The Scenes

Aside from the Studio C cast’s untiring love for each other, Juliet said she was surprised to find that there were more similarities between the people behind the two shows than differences. She found a group of people that are very deliberate about the comedy they create—a group that doesn’t want to settle for cheap laughs and works very hard to produce sketches that entertain adults but are also appropriate for children.

“I can’t think of anything much harder than that,” Juliet says. “There are no shortcuts to that kind of blend.”

The Werners sat with them in the writers’ room as ideas were tossed around, they listened to discussions after dress rehearsal where the cast reviewed what worked and what didn’t.

“They’re just so tireless in their efforts to generate the best sketch they possibly can,” Juliet says. “The way they approach comedy is at times academic. They’ll talk for a while about what makes one joke better than another joke.”

While Juliet expected to find a group of talented, funny people, she says the cast exceeded her expectations.

“I was taken with how much they are motivated by trying to help and uplift people,” Juliet says. “As a comedy fan, I’ve experienced that, that experience of tuning to a comedy show, laughing, and feeling better after it. It’s so cliché, 'laughter is the best medicine,' but it’s true, and I know they get that feedback on a regular basis. That left a really deep impression on me.”

Still, Studio Cwas never meant to have the same cast forever, and in September 2018, the 10 original cast members of the show announced their plans to launch a new project, JK Studios—an online family-friendly comedy network set to release a whole series of new shows in January 2019.

According to an interview with the cast in the Deseret News, Stacey Harkey and Matt Meese say the team will continue to hold to their mantra of creating wholesome, new content that old and new fans alike will appreciate.

And Juliet Werner says that based on what she saw during her time with the cast, she wouldn’t bet against her new friends.

“They know what kind of comedy they want to make. They want to make family-friendly comedy, and they know who they want to work with,” she says. “They’ve got all this momentum performing with Kenan Thompson in front of a sold-out audience in New York City, so I feel like all signs point to success in the future. It’s definitely ambitious. They’re definitely taking on a lot, but they’re so excited about it, and their fans are so loyal that I think they’re going to be successful.”