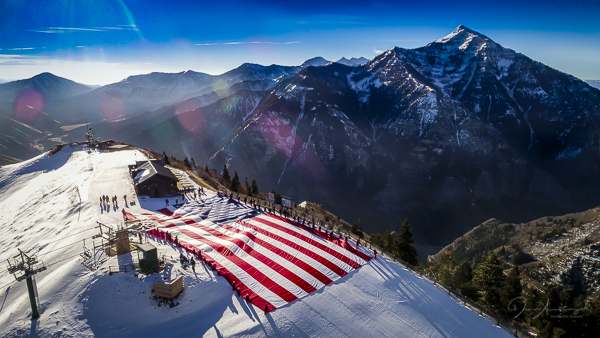 If you happen to be hiking in Grove Creek Canyon, located on the outskirts of Pleasant Grove, Utah, during the week of July 4, you are likely to notice a flag fluttering above the trail. Stretching a fourth of an acre, with the familiar red, white, and blue stars and stripes adorning its 400-pound frame, it’s hard to miss. Big Betsy, as she’s been affectionately named, is the largest free-flying American Flag in the world, and every Independence Day she’s unfurled in the canyon, serving as an unforgettable reminder of what’s being celebrated to all those who see her.

The Beginning and the Wow Factor

Kyle Fox has always been a go-big-or-go-home kind of person. And his latest project is perhaps his most ambitious to date. 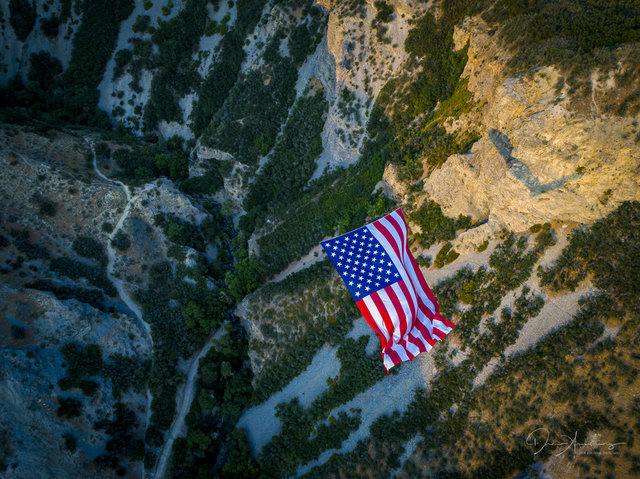 “I’ve fallen in love with the wow factor,” Fox says of the project’s genesis. “It was more so of a stunt. In fact, we didn’t even really get a lot of permission the first year. We just took it up there in the dark of the night on the third [of July] and flew it.”

That first year, Fox says they only had about five people helping with the project, and the flag they used was much smaller, measuring only 30 feet by 60 feet.

“We hadn’t asked for permission from the city,” Carrie Fox recalls. “Kyle, looking back, says, ‘We did it like Nike; we just did it.’”

Despite its somewhat rushed execution and the fact that the flag used was not Big Betsy but rather her smaller sister, Baby Betsy, the flying flag had an effect on the community.

“What happened to follow was something we really didn’t expect,” Fox says. “It was in the community; there was a buzz.”

The project has since gained volunteers, national attention, and also a name, Follow the Flag. But as Fox will tell you, the movement is much more than a big flag, and it has a very real impact on people.

“It’s cool and all that, to see it and feel it and hear it, but there is something that is bigger and more powerful and a spirit that is completely palpable and tangible that I can’t really explain to anybody,” Fox says. “It has completely surprised me, blown me away; something I never expected.”

A Shift in Focus

“My husband is stationed in Iraq, and I leave here in three days with my family to go and live with him. When I get over there, I cannot go out in public with my hair showing; I cannot drive a car. There are so many privileges that I have right here, right now, today, that I won’t have when I get over there,” Carrie Fox remembers the woman saying.

That was in 2015, and the woman speaking was standing in the back of a pickup truck at an impromptu ceremony.

Since then, Carrie Fox and her family have heard countless other citizens and veterans share their stories about what the flag means to them, but this woman's story continues to stick out.

“It just was the first time that I really had a punch to the face of the freedoms I am afforded,” Carrie says. “The flag has really given me stories from people who are real human beings who bring me my freedom.” 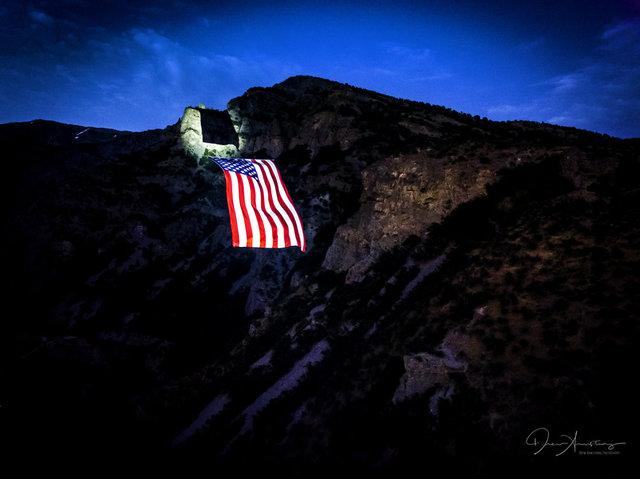 The meaning and significance of what they are doing is not lost on her.

“For us to start out doing this as a stunt and then Heavenly Father saying, ‘This isn’t a stunt.’ You know, America has everything to do with the restoration of the gospel, and then here are the stories to stand behind it. It has been really eye-opening for us,” she says.

The Greatest Thank You

Gail Halvorsen, an American pilot during WWII, is perhaps best known as the Candy Bomber, a nickname he was given after dropping literal tons of candy from his airplane to hungry German children during the war.

Today, he is one of the many veterans who has been touched by Follow the Flag.

“He’s a big supporter of what we’re doing,” Fox says. “You know, our ideals are parallel. What we’re trying to do is bring unity, bring hope, bring peace, bring inspiration.”

And based on people's reactions, it's working. 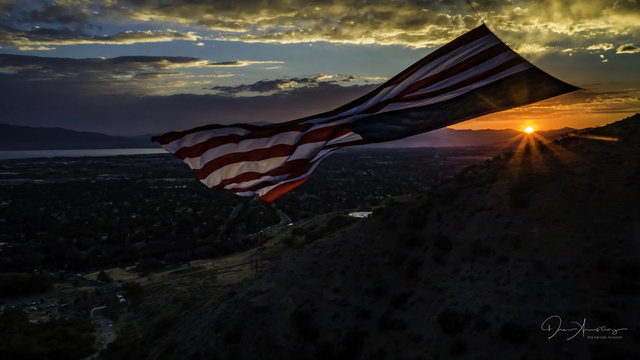 “The veterans are awesome to see,” Fox says. “I’ve heard it multiple times that this is the best thank you they’ve ever had; still I’m trying to figure out how that is working, but it is.”

In the years following its creation in 2015, Follow the Flag has become a fixture in the Pleasant Grove community, and there have been over 25 Eagle Scout projects done in tandem with Follow the Flag.

Layne Thompson, a volunteer whose son was one of the first scouts to work with the organization for his Eagle project, has seen the impact it's had, especially on the youth.

“It’s just great to see the youth be affected so profoundly by it and want to be part of it," Thompson says.

More than enthusiasm, it has also brought different groups of people together, helping to heal rifts.

“This area is a conservative area, just by nature, when it comes to politics," Thompson says. "However, there are certain people who believe that there should be even more limited government, including city government. So we’ll get city councilwomen and men on the mountain with us and other citizens who have been vocal about opposing certain projects. . . . And sometimes that dialogue can be a little bit harsh, but those same people will show up to volunteer for this, and they’ll work alongside each other, and it just builds these bridges of unity. And there is just an underlying sense of unity and pride in Pleasant Grove that you couldn’t foresee happening; it is just really amazing.”

Through their experiences with Follow the Flag, both Kyle and Carrie have seen God’s hand stretch out and help them.

“The timing has always really been crazy for our family when it comes to hanging that flag,” Carrie Fox says. “It just seemed like things kept coming together to make [Kyle’s] life easier.” 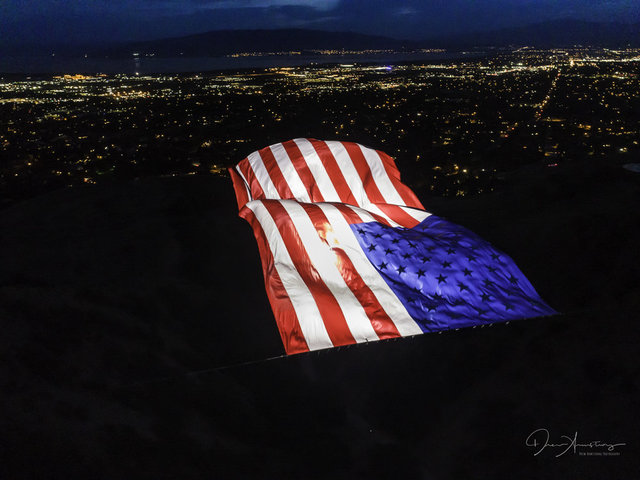 Fox’s team, in particular, was God-sent. Volunteers with the exact skills needed often appeared at just the right times.

“There are experts that have come out of the woodwork to make it completely possible,” Fox says. “That, in itself, has been a real testimony builder to me. I don’t want to try to do this alone. And even in life, everyday life, we are never alone. When we’re working together and we are working with the right people, or spirit about us, then there is nothing that can stop us.”

Even when things don’t go perfectly, and there are challenges, Carrie Fox knows there must be opposition in all things and, ultimately, that God is in control.

“I’ve been able to kind of watch [Kyle] just be navigated through the opposition," Carrie Fox says. “Kyle just kind of holds the reigns of this beast and is letting Heavenly Father drive where he wants us to go, and Kyle is just trying to keep a hold on the reigns and just enjoy the ride.”

And the community has rallied around Fox, the flag, and the movement.

“What comes from adversity is strength," Thompson says.

Fox, for his part, lets a simple gospel principle guide his actions.

“Service is the secret; it’s the secret to getting through addiction or any challenge or pain or suffering,” he says. “It’s the easy Primary rule: forget about yourself and serve others.”

All images by Drew Armstrong.