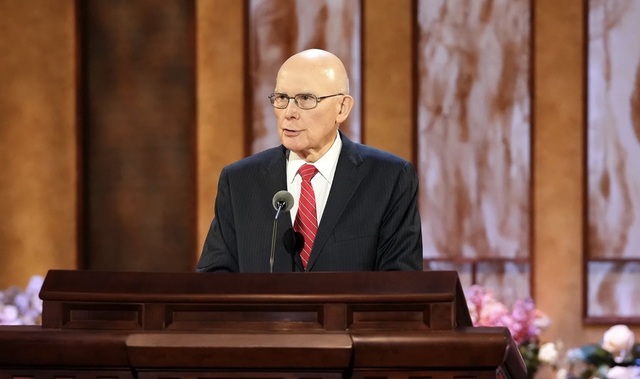 When recently retired United States Court of Appeals Judge Thomas B. Griffith heard the beginning of President Dallin H. Oaks’s talk, he was taken aback. Why would President Oaks choose, on Easter Sunday, to speak about the dividing parties of the United States?

“I have to admit, at first, I wasn’t very happy with that. Easter Sunday should be a time, I think, reserved for us to bear a powerful witness of the risen Lord,” Griffith said while participating in a panel discussion examining President Oaks’s talk during the Religious Freedom Annual Review held at Brigham Young University last week. “But . . . it’s a remarkable talk. And I think the fact that it was given on Easter Sunday, sort of out of tune with what an Easter Sunday sermon is expected to be only highlights its importance, its timing. I don’t want to speak for President Oaks, but I detected a sense of urgency and timeliness in it—to say this needs to be heard and understood now.”

Christine Durham, who sat with President Oaks on the Utah Supreme Court prior to his call as an Apostle, also participated in the panel. A question was directed to Judge Durham regarding the significance of President Oaks choosing to begin his talk by referring to his legal career.

“It is unusual in my experience and perception,” Judge Durham said. “Elder Oaks is a deeply committed person and I think when he accepted the call to the Twelve and became an Apostle of the Church, that became the sole mission of his work. But I also know having served with him on the court and having been acquainted with him and [having been] his friend during the transition, it wasn’t easy for him to leave the law.

“He loved the law with a great deal of passion and commitment. Now, obviously, you know his first and most fundamental convictions and passion were for service to the Lord or he wouldn’t have accepted the call. But it is extremely significant that he hearkened back to his legal training, to his legal scholarship, and to his experiences as a lawyer and judge because I do think that they inform and his comments suggest that they greatly inform his reverence for the Constitution, the degree to which he knows it, and understands it, and has studied it, and [loves] it.”

There was one line in President Dallin H. Oaks’s talk that struck Griffith most: “On contested issues, we should seek to moderate and unify.”

► You may also like: What people are saying about President Oaks’s talk on the US Constitution

Later in the discussion, he continued, “You want to support and defend the Constitution of the United States then get off your cable channels, stop repeating talking points that are prepared by partisans, and look to build the spirit of amity and mutual deference in your community. . . . Those who don’t, those who sow seeds of distrust, are undermining the Constitution. They’re damaging it in a significant way.”

Jane Wise, an associate director for the International Center for Law and Religion Studies at BYU, also touched on the statement calling for Latter-day Saints to moderate and unify. She specifically addressed the significance of this talk and message immediately following a morning session that highlighted the international character of the Church.

“Contrast this from very much a celebration of the 21st-century church and being unified in the morning from all points on the globe to this strong reminder from President Oaks that there has not been a more politically polarized time in modern US history, and that divisiveness is a danger to our country as well as to our souls,” Wise said.

You can watch the entire discussion by clicking here. Read a transcript here.

Lead Image: Courtesy of The Church of Jesus Christ of Latter-day Saints