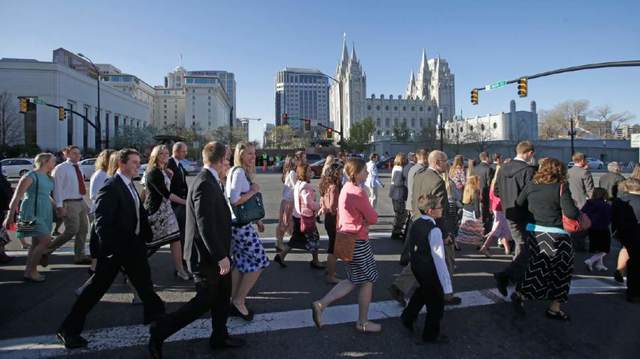 LDS Living does not support or endorse political candidates. However, we did find this discussion relevant and interesting to the Mormon community.

During the 2012 presidential election, Latter-day Saints and Mormonism frequented national and international headlines. But that was expected, what with Mitt Romney running for president and the Book of Mormon musical winning nine Tony Awards and one Grammy.

However, I don't think anyone anticipated how much Mormons would be in the spotlight this year. With LDS voters making an important impact this election, presidential candidates Gary Johnson, Donald Trump, and Hilary Clinton all targeted Mormons in letters they wrote to citizens in Utah, with Hilary Clinton even quoting female Church leaders.

Then, recently on CNN, reporter Jake Tapper  posed an interesting question while speaking about moral relativism and the fact that some of Donald Trump's strongest supporters are religious leaders, despite concerns over moral issues: "When did Mormon [political] leaders become stronger in terms of faith for the teachings of Jesus Christ than Christian leaders?"

The Huffington Post also picked up on this angle of Mormons and politics, recently publishing an entire piece focusing on Mormons this election.

"It’s easy to forget that just four years ago, the Evangelical voter bloc struggled to coalesce around Republican candidate Mitt Romney, a man whose personal integrity, ability to keep his marriage vows, and earnest faith were never in question. You see, Romney is a member of the Church of Jesus Christ of Latter Day Saints, he’s a Mormon, and Evangelicals have long viewed Mormons as faux Christians and theological heretics who follow Joseph Smith rather than Jesus Christ. On closer examination, much of the bad blood between Evangelicals and Mormons might stem from how similar they are: both Mormonism and Evangelicalism are culturally conservative, politically active, proselytizing movements whose ethos was shaped in the wave of 19th-century American revivalism that historians call the Second Great Awakening. . . .

"This year Mitt Romney . . . has demonstrated a level of courage and principle that so many Republican elected officials and partisans have lacked. . . . In a survey this past week among Utah Mormons only 38% said they were supporting Trump, with a higher percentage of them saying they have an unfavorable view of Trump than of the perennially unpopular Hillary Clinton. In our hyper-partisan times, a Republican candidate getting only 38% of the Utah Mormon vote is a veritable castigation. And if my Mormon friends are any sort of representative sample, the community’s distaste for Trump is deep-seated and rooted in righteousness. . . .

"If the test of the moral courage of a religious movement is how they stand for their values when there is an opportunity to abandon them for political expediency, then Mormons have passed the test thus far in 2016. They have been the Moral Minority. They are the Daniels, the Shadrach, Meshach, and Abednegos, the Esthers of this election season, who have refused the idolatry and apostasy that Trump embodies in his gilded insanity. While Evangelicals may still quibble with Mormons about theology and scripture and history, they should take a lesson from Mormons’ righteous backbone while there is still time."

Latter-day Saints continue to receive attention based on our general change in voting trends, but it seems like the world is getting too caught up in measuring righteousness and discipleship based on worldly elections, standards, and opinions. Oftentimes these types of comparisons feel uncomfortable and even unwarranted, especially when it comes to a matter of comparisons or judging religions based on a single factor.

So while it's tempting to take these statements as compliments, I think it's important for us to remember first and foremost that discipleship is based on our devotion to our Savior, Jesus Christ, not on politics.

► Watch Next: CNN: When Did Mormons Become Stronger in the Teachings of Christ Than Christian Leaders?