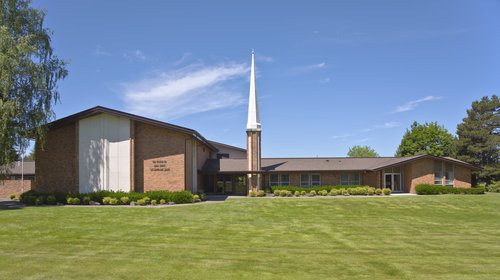 This article was originally shared on LDS Living in 2017 and has been updated to reflect additional recent counsel.

“What church do you belong to?”

“The Church of Jesus Christ of Latter-day Saints.”

Compared to churches worldwide, the official name of The Church of Jesus Christ of Latter-day Saints can seem like a mouthful, but every part of this name came through revelation.

Doctrine and Covenants section 20 uses similar phrasing: “No one can be received into the church of Christ unless he has arrived unto the years of accountability before God, and is capable of repentance.”

It wasn’t until 1838 that a revelation put to rest the varying opinions and appellations. The Lord revealed in Doctrine and Covenants section 115 what the Church should be called going forward: “For thus shall my church be called in the last days, even The Church of Jesus Christ of Latter Day Saints” (emphasis added). In 1851, Church leaders in Utah began using the hyphenated version with the small "d" that we are familiar with today, as a way to distinguish themselves from other offshoot groups using the term "Latter Day Saints." This change was reflected in the 1876 version of the Doctrine and Covenants and is the standard construction still used today.

► You may also like: 17 historic Church sites are getting a name update. Here's why

The name of the Church is not negotiable. When the Savior clearly states what the name of His Church should be and even precedes His declaration with, “Thus shall my church be called,” He is serious.

The Importance of Names in the Church

Names are an important part of Jesus Christ’s gospel and have been since ancient times. They set people and objects apart from each other, giving them a unique value and identity.

Let’s think back to the first time human beings were placed on the earth. What was the first thing God did? He gave Adam his new name, and then He gave Adam the authority and tasks to give names to all the animals and living creatures on the earth. When Eve was created, one of the first things Eve received was a name: “She shall be called Woman, because she was taken out of man” (Moses 3: 23). And then after being cast out of the Garden of Eden, another meaning to her name was added: “And Adam called his wife’s name Eve, because she was the mother of all living; for thus have I, the Lord God, called the first of all women, which are many” (Moses 4: 26).

We give names in baby blessings, state full names in priesthood blessings, and sign our names on our temple recommends. Names are symbolic in the temple and our given names become our primary identity.

The Name of Christ

But there is one name that comes up more than any other: the name of Christ. Start paying attention to how many times we are told to or reminded that we have taken upon us the name of Christ. The sacrament prayers talk about this, our baptismal covenants remind us of this, and the temple is overflowing with beautiful covenants that require us to take upon ourselves the name of our Savior, Jesus Christ. It only makes sense that His church would be labeled with that sacred name as well. Consider the following scripture from 3 Nephi 27:

► You may also like: What I learned about using the full name of the Church from 2 reverends

Whether we are praying, repenting, covenanting, wearing a missionary badge, or just living as a member of The Church of Jesus Christ of Latter-day Saints, Christ is the key to all things. He is our advocate with Heavenly Father when we repent. We pray in His name, we represent who He was and is when we wear His name on a missionary badge, and we agree to honor and appropriately use His name every time we make or renew a temple and baptismal covenant. Literally everything we have or do is because of Christ. What a beautiful way to help us stay humble and recognize our dependence on Him.

The name of the Church was given by Christ and represents Him through its name. And if we claim that title, we have a lot of work ahead of us to live up to it, represent it well, and report our actions. I imagine one day I will be greeted by my Savior. How will I answer Him if He says, “I gave you special care over my name. I gave you permission to use it for good and act in my name as a tool in my hands to help others come back to celestial glory and find happiness. What did you do with it?” I want to be able to report that I used it with reverence and respect and never inappropriately. And that starts with how I view myself as a member of The Church of Jesus Christ of Latter-day Saints, because “For by this name [Jesus Christ] shall ye be called at the last day” (3 Nephi 27:5).

As President Nelson reminded us in the October 2018 general conference, "So, what’s in a name? When it comes to the name of the Lord’s Church, the answer is 'Everything!' Jesus Christ directed us to call the Church by His name because it is His Church, filled with His power."