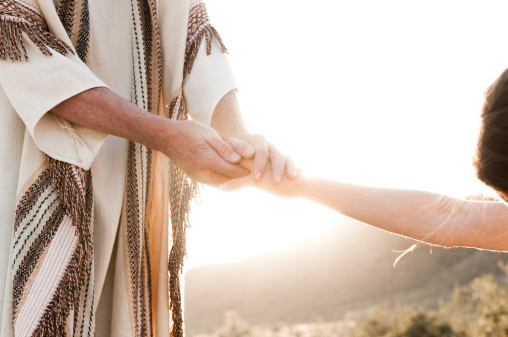 Why the Savior Is "Touched" by Our Infirmities

As we think about the Savior and His life this Easter weekend, it is also important to reflect on how His "touch" in our lives can help us remember Him throughout the year.

One of the tenderest moments in scripture is the story of the prodigal son, who, having left home to pursue wild times, finally finds himself, instead, starving and degraded to eating husks with the swine. When at last he “came to himself” he turns his face home again.

What is so noteworthy here is that in that journey back, while he is “yet a great way off” his father “ran and fell on his neck, and kissed him” (Luke 15:20). How could there be a kinder, more tender, more meltingly forgiving embrace than this one? All the longing of a fond parent was poured into this moment with a son who hardly deserved such compassion.

This father, of course, represents the Lord. Think of the level of rejection this parent had faced.

In requesting his inheritance the boy had essentially said, “You are as good as dead to me. I discard your teachings, your honor, your name, any life with you. “Then, in a fit of entitlement, he says, “I demand that you give me my inheritance.”

Did the father have to sell part of his business or his land to grant this inheritance? Did he impact his own security in doing this? We are not told, but certainly, in every way, this father’s dignity had been impinged. Add to that the years of agonizing worry he had experienced wondering how his son fared. The injury and rejection was certainly a mountain high.

We are not told how the father knew that the son had turned his face back home or where he was on his return journey when he ran to greet him. It could have been others who passed the word along. Or perhaps the father was so keyed into the boy that he ‘just knew.’ Either way, this running while the son was still a great way off speaks volumes about the depth of his love. No indignity or prior offense stopped the father from running to his repentant son. No indiscretion or riotous living had quenched the father’s love. He fell on his neck to embrace him because being the father he was, he could not do otherwise.

A Touch is a Personal Thing

It is the love of the Lord this story teaches, a God who falls upon us who are all sinners, with an embrace when we come home to him. This is a God who touches us rather than remain in some distant heaven, far away.

The Lord’s touch is individual, meant for us personally. One can hardly touch a crowd. No matter how many children He has, He is still able to touch us one at a time where we are.

Mormon Life SaviorSavior,Mormon Life
Comments and feedback can be sent to feedback@ldsliving.com