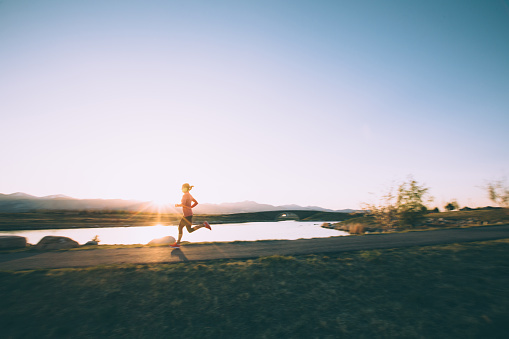 When it comes to goals, I am the queen.

I have short-term and long-term, SMART and silly goals all planned out every New Year's Eve as resolutions for the year.

But I never thought I would hate a New Year's resolution—especially one I accomplished. After all, what could ever go wrong with setting a worthy goal?

But one year, I took a resolution way too far.

When I turned 11, it was like I hit a wall of self-consciousness. While I was a healthy weight, I was also very tall for my age and I just felt ginormous compared to the other girls and guys my age.

This feeling lingered with me all the way through high school. I just never felt like I was the right size or skinny enough to fit in.

The year I moved away to college, I decided my New Year's resolution was going to be to lose 10 pounds and finally be like "the skinny girls."

I exercised, I ate more foods that had better health benefits, and I lost 10 pounds in a few months. I was still a healthy weight and it felt fantastic to be in better shape.

I exercised more. I ate almost nothing with a high sugar or fat content. And I lost five more pounds.

By this time, I was still within a healthy weight range, but it just didn't feel like quite enough. I thought the more weight I lost, the more I would like myself and the more others would like me. And so my diet and my exercise started to swing toward the extreme. I would constantly compare myself to other girls my age and became obsessed with becoming thinner.

After losing about five more pounds and shuffling closer to the edge of being underweight, I knew this had to stop. I was taking this too far to be healthy. I had to stop believing that I would think better of myself for every pound I lost. I had to remember that Heavenly Father loved me no matter what my size was.

At first, it was really, really difficult, but I eventually focused more on moderation in my diet and in my exercise. I gained five pounds back, which became more of a victory than a defeat as I learned what was a healthy lifestyle for me.

I knew what I experienced wasn't anything unusual. A lot of people struggle with body image issues and, unfortunately, can take weight loss goals way too far. But I never thought a popular New Year's resolution to lose 10 pounds could lead to this.

► You'll also like: 5 Body Image Myths We Should Stop Believing

Then I came across an incredible blog post by an LDS author. The author wrote about accomplishing a New Year's resolution that was a little familiar: losing weight.

I expected to read about how she lost a few pounds and life was better because of it.

Instead, the author honestly described how when the weight came off, it didn't magically banish all negative body image thoughts. She still struggled with her body image some days, and she was even tempted to lose more than was healthy.

The best part of the post, though, was when she decided she was going to stay a healthy weight, not compare herself to others, and love herself matter what her size was.

From what I have since heard from others and seen from my own experience, it can be incredibly easy to lose sight of the sacred nature of our bodies while striving to make them more healthy.

Even though we start out with wanting to improve the health of the wonderful gift of a physical body, sometimes even the best of health goals can be distorted into something hurtful.

And when comparing ourselves with others and measuring progress by using an impossible, unreal standard, no success will ever be enough.

I plead with you young women to please be more accepting of yourselves, including your body shape and style, with a little less longing to look like someone else. We are all different. Some are tall, and some are short. Some are round, and some are thin...

We should all be as fit as we can be—that’s good Word of Wisdom doctrine. That means eating right and exercising and helping our bodies function at their optimum strength. We could probably all do better in that regard. But I speak here of optimum health; there is no universal optimum size.

Frankly, the world has been brutal with you in this regard. You are bombarded in movies, television, fashion magazines, and advertisements with the message that looks are everything! The pitch is, “If your looks are good enough, your life will be glamorous and you will be happy and popular.” That kind of pressure is immense in the teenage years, to say nothing of later womanhood. In too many cases too much is being done to the human body to meet just such a fictional (to say nothing of superficial) standard.

I'm not saying that losing weight as a New Year's resolution is bad a thing. As long as it's a healthy weight-loss goal, why not?

What I've learned is it's important to remember not to take a worthy health goal and turn it into something obsessive, unhealthy, and hurtful to both spirit and body.

In a lot of ways, I hate that I took that New Year's resolution too far. I should not have let the deeper problem of comparing myself to others get in the way of a worthwhile goal.

But I'm glad this experience taught me to be more careful in the way I treat the body Heavenly Father gave me and that I now know I don't have to have complete a New Year's resolution to love it.

Stop sacrificing to the idol of the perfect woman. Body Image Breakthrough cuts through the fad diets and pop psychology to find the root of women's body image issues. Free yourself from negative body image and live each day as Heavenly Father intended, wrapped in the soul-healing beauty of the Lord.