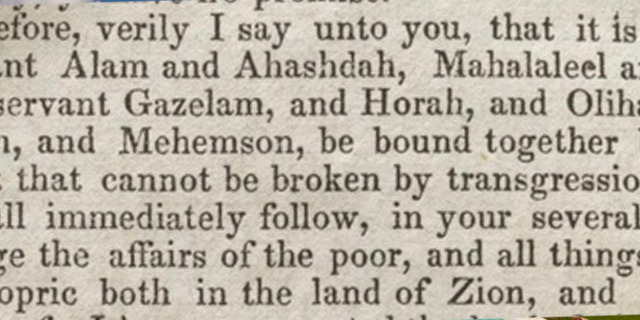 Why were code names and code words used in early editions of the Doctrine and Covenants? Were sections added or removed in various editions?

If you look at an edition of the Doctrine and Covenants published prior to 1981, you would likely be very confused by the use of code names and code words. For example, Oliver Cowdery was called “Olihah” and Martin Harris? “Mehemson.”

According to an article published by the Church History Department, this was done “to avoid providing evidence for lawsuits against Church members.” The code names were replaced with actual names in the 1981 edition.

An article from the BYU Scholars Archive, states that the use of code names  came on the heels of growing hostility toward the Church and as a result, “the decision was made to conceal the true identities of various early leaders, particularly those responsible for the economic matters of the Church. Since there were numerous problems connected with the early attempts to establish the law of consecration and stewardship; especially as it related to property holdings, it was nature to hide the identity of those assigned specific temporal duties.”