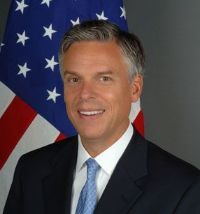 WikiLeaks cables include some signed by Huntsman

A series of leaked cables signed by U.S. Ambassador Jon Huntsman Jr. shine a light on the diplomatic dance between China and the United States, as the two superpowers collaborate in a common interest to prevent the spread of nuclear weapons in North Korea and Iran.

The cables depict Chinese officials as de facto U.S. liaisons with both Iran and North Korea, conveying messages and delivering information and, at times, encouraging the United States to pursue diplomatic channels.

But several cables, sent in February by Secretary of State Hillary Clinton, instruct the embassy to prod the Chinese to take action to stop Iran from acquiring missile parts and technology, including gyroscopes, carbon fiber and thermal imaging systems, from Chinese companies.