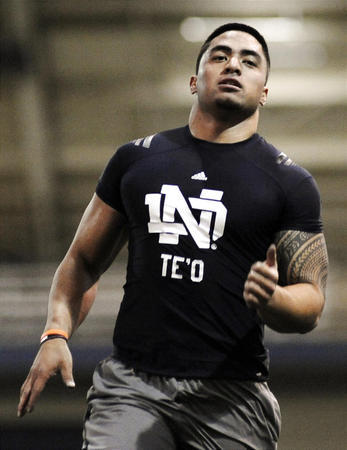 Will the Minnesota Vikings take Manti Te'o with one of two 1st-round picks?

The Minnesota Vikings have two picks in the first round of the NFL draft and one big hole in the middle of their defense.

The Vikings have vowed to find their starting middle linebacker in this year's draft, and the famous-for-more-than-football Manti Te'o could be still on the board when they're on the clock with the 23rd and 25th selections Thursday night.

The Heisman Trophy runner-up from Notre Dame, whose school-record seven interceptions last season made him a national story well before the hoax began about his fake girlfriend, could be a good fit in Minnesota. The Vikings, after all, took three of his former Fighting Irish teammates over the last two drafts and have five guys from Notre Dame on their roster.