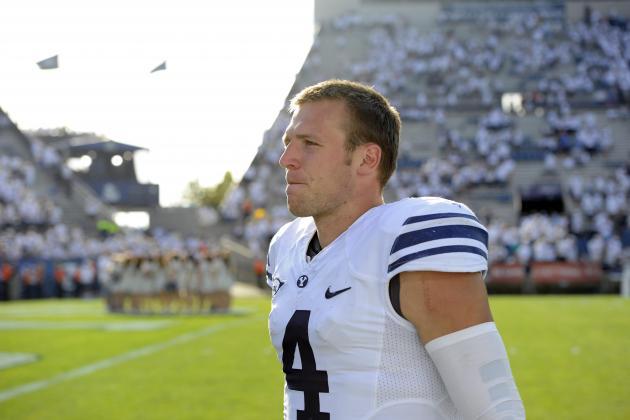 If Taysom Hill is healthy, he's one of the most electrifying college football players in the country.

Though he's performed admirably during his time as Brigham Young University's starting quarterback, Hill's career has been marred by three—yes, three—season-ending injuries. During his freshman season in 2012, he took a helmet to the knee in the closing seconds of a victory against Utah State. Before breaking his leg (also against Utah State) in 2014, Hill's Cougars were 4-0 and he was a front-runner for the Heisman trophy. And perhaps most heartbreaking of all, Hill's widely-hyped senior season came to an abrupt end when he suffered a freak Lisfranc fracture during the first half of BYU's season opener against Nebraska.

The first half of that game was devastating for BYU fans, but the second half was what began the legend of freshman phenom Tanner Mangum. 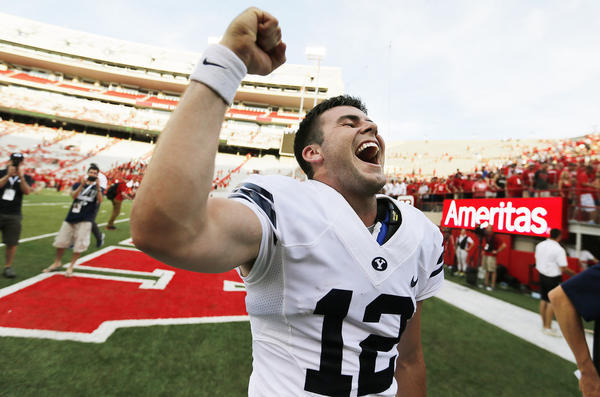 Image from Torn By Sports.

Mangum, a freshman quarterback who had returned from his mission to Chile just three months prior, was expected to be Hill's backup for the entire season—but fate had different plans. On national television and with his Cougars down by one, Mangum silenced the Cornhusker crowd and won the game with a 42-yard Hail Mary to receiver Mitch Mathews as time expired—a play that would hereafter be known as the "Mangum Miracle."

The next week, he did it again. In his first start, Mangum and the Cougars trailed Boise State almost the entire game. But, on fourth and seven with less than a minute to go, another Mangum Hail Mary—this time to Mitchell Juergens—gave BYU their second consecutive thrilling victory.

At this point, Mangum was the big man on campus. Literally: ESPN ran a feature on him called "Big Man on Campus." Though the rest of his season wasn't quite as miraculous, he finished with solid numbers for a freshman and led BYU to a solid 9-4 finish. It was widely expected that Mangum would be BYU's quarterback of the future.

But now, everything's up in the air. Though he was eligible to become a graduate transfer—a "free agent" of college football—Hill unexpectedly opted to return to BYU. This announcement sent waves of excitement throughout BYU's fan base, and according to new offensive coordinator Ty Detmer, Mangum was "as excited as anybody." But now, his starting job is in jeopardy.

Though he's already a good quarterback and nearly exploding with potential, Tanner Mangum isn't yet Taysom Hill. Mangum is a solid pocket passer with an accurate and powerful arm, but Hill is quite simply an athletic freak. He's a dual-threat quarterback—defenders trip over themselves wondering whether he'll pass, run, or just plain jump over them (like he did to Texas in 2014). If Hill can stay healthy and perform at the level he has in seasons past, he'll likely start for the Cougars against Arizona.

Gif from The Big Lead

However, there's always a possibility that Mangum could win the starting job from Hill. Or perhaps new coach Kalani Sitake will opt for a two-quarterback offense. But no matter what happens, BYU football fans should be excited for the 2016 season. Most teams have a hard time finding one good quarterback, but the Cougars have two. Hill and Mangum will fight a battle, to be sure—but whoever wins, the Cougars come out on top.