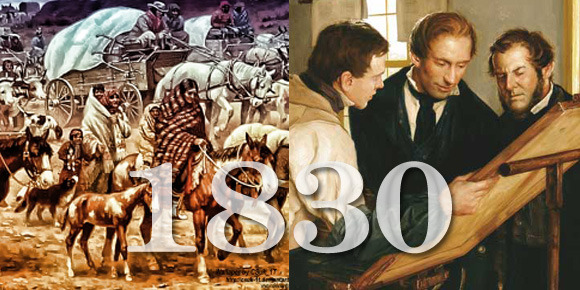 World and Church History Connections You Didn’t Learn in School

History classes for most of us were all about world events or the history of the country we lived in while church history was only learned, well, in church. But we never really put them together. When you place these two timelines side by side, you may be surprised to find out that Brigham Young sent the first transcontinental telegraph message the same year that the Civil War started, or that the first latter-day Quorum of the 12 was organized the same year famous author Mark Twain was born. Let us know your favorite set of events, or any we left out, in the comments at the end!

Images retrieved from history.com and lds.org

IN THE WORLD: President Andrew Jackson signs the Indian Removal Act, forcing all Indian tribes to federal territory west of the Mississippi River.

Many of these same Indians later hear the message of the gospel from missionaries like Oliver Cowdery, Peter Whitmer Jr., Ziba Peterson, and Parley P. Pratt who were called to preach to the "Lamanites" in that area.

IN THE CHURCH: Joseph Smith is working with E.B. Grandin to publish the Book of Mormon and a small group of saints official gathers in the Whitmer home to officially organize the Church.

IN THE WORLD: A growing system to help slaves escape in the United States is officially dubbed “The Underground Railroad." IN THE CHURCH: In March, Joseph is commanded to begin translating the New Testament. His translations are later included in the Pearl of Great Price as the Joseph Smith Translation. A few months later, during the June conference, several brethren are ordained to the office of high priest for the first time.

IN THE CHURCH: Church leaders in Kirtland commit to improve their minds by organizing The School of the Prophets, where each is instructed spiritual and secular matters. It is at one of these meetings in February 1833 that the Word of Wisdom is revealed.

IN THE CHURCH: The first modern-day Quorum of the 12 Apostles is organized, largely from the group of men who marched to reclaim land in Missouri on what came to be known as “Zion’s Camp”.

IN THE WORLD: A small group of Texans, including the famous Davy Crockett, defend the garrison called “The Alamo” against the Mexican army. They are finally beaten and slaughtered in a devastating siege in February 1836, popularizing the cry “Remember The Alamo” as a symbol of the struggle for freedom against impossible odds.

IN THE CHURCH: Latter-day Saints in Kirtland are joyfully gathering for the dedication of their first temple, where they witness angels on top of the temple and sing “The Spirit of God”.  The Savior appears to Joseph Smith in the Kirtland temple to accept His house. Moses, Elias, and Elijah also appear to restore important Priesthood keys.

IN THE WORLD: The first version of the photograph, the Daguerreotype, is introduced in Paris.

IN THE CHURCH: Latter-day Saints receive a letter from Joseph Smith while he is confined in Liberty Jail. It later became D&C section 121 and is now widely quoted by church members during times of adversity.

IN THE WORLD: The first postage stamp, called the Penny Black, is issued in Britain.

IN THE CHURCH: Seymour Brunson, one of the first settlers in Nauvoo and an early missionary for the church, dies. At his funeral, the Prophet Joseph Smith announces the doctrine of baptism for the dead.

Images retrieved from massgeneral.org and wikimedia.org

IN THE WORLD: Scientific knowledge advances with the first successful “painless operation” using ether as anesthetic.

IN THE CHURCH: Spiritual knowledge increases as the Relief Society is organized and the first temple ordinances are conferred in the upper room of Joseph Smith’s red-brick store, since the Nauvoo Temple is not yet completed.

IN THE WORLD: Charles Dickens publishes his now-famous and touching tale “A Christmas Carol." He just missed using the first practical typewriter, patented in August 1843, to write the story!

IN THE CHURCH: Though persecution continues, Joseph and Emma celebrate their 16th wedding anniversary and six months later are sealed for time and all eternity in Nauvoo.

IN THE WORLD: The first long-distance telegram is sent by Samuel Morse from the Supreme Court room in Washington D.C. to Baltimore, Maryland. Ironically it contains the message “What hath God wrought?”

IN THE CHURCH: The Saints are devastated to learn that Joseph and Hyrum Smith have been killed in Carthage Jail.

IN THE WORLD: Wuthering Heights, a classic novel written by Emily Bronte and now studied by thousands of students, is published in England.

IN THE CHURCH: Brigham Young and a company of Saints enter the Salt Lake Valley on July 24th, where President Young famously declares “This is the right place.”

IN THE WORLD: The California Gold Rush begins when a gold nugget is discovered by James W. Marshall while constructing a sawmill for John Sutter.

A few members of the recently discharged Mormon Battalion, also working on Sutter’s mill during the gold discovery, faithfully finish their commitment at the mill while searching for gold. They later return to Utah and boost the growing economy with an estimated $25,000 - $30,000 worth of gold.

IN THE CHURCH: Pioneer crops are plagued and destroyed by thousands of crickets. Miraculously, the crops are saved by the appearance of hundreds of seagulls, which appear daily for three weeks to devour the pests.

IN THE WORLD: Levi Strauss introduces the first pair of blue jeans to the world.

IN THE CHURCH: The University of Utah, originally called the University of Deseret, is founded under the direction of Brigham Young, primarily as a place to train elementary school teachers to serve the growing number of children arriving with the Saints.

IN THE WORLD: The first safe commercial passenger elevator, is completed and installed in the social hub of 488 Broadway in New York City. The device was invented by Elisha Otis and rose around 40 feet per minute.

IN THE CHURCH: Brigham Henry (B.H.) Roberts is born in England. After overcoming significant trials as a boy and only having one year of formal education at the University of Deseret, he will later author the 3,400-page, Comprehensive History of the Church reference books.

IN THE WORLD: As tension between slave states and free states builds in the United States, Civil War breaks out.

IN THE WORLD: Victor Hugo’s famous Les Miserables is published this year as the Civil War rages on.

IN THE WORLD: Civil War continues as the most famous and devastating battle of the war recorded takes place in Gettysburg, Pennsylvania. The Emancipation Proclamation, freeing all slaves in the states that seceded, is read by Abraham Lincoln.

IN THE CHURCH: Citizens are irritated by the presence of soldiers stationed in the foothills east of Salt Lake and petition for a new governor. They also begin construction on the Tabernacle.

IN THE WORLD: The Civil War comes to an end.

IN THE CHURCH: In the October conference, Brigham Young emphasizes the need for the Saints to be self-sufficient and help one another economically.

IN THE WORLD: Science explodes as Alfred Nobel receives a patent for his invention of dynamite.

IN THE CHURCH: The Tabernacle is completed enough to hold the October 1867 general conference in, though it does not yet have a gallery.

Images retrieved from kentuckyconfidential.com and fineartamerica.com

IN THE WORLD: The first Kentucky Derby is won by the horse Aristides.

IN THE CHURCH: The Tabernacle is officially completed and dedicated. The Saints broaden their education by organizing the Brigham Young Academy and starting the Mutual Improvement Association for young men – the beginnings of our modern-day Young Men program.

IN THE WORLD: Technology is advancing as Alexander Graham Bell makes the first telephone call in New York.

IN THE CHURCH: Brigham Young asks the women of the church to begin saving grain for a time of need. This movement will prove valuable a few decades later during World War I, when 205,518 stored bushels are sold to the United States.

IN THE WORLD: Thomas Edison reveals the latest technological wonder: the phonograph.  In the world of art, the famous ballet, Swan Lake, by Pyotr Tchaikovsky, debuts in Moscow.

IN THE CHURCH: The St. George Temple is dedicated. It is the first temple built and dedicated since the move west.

Images retrieved from britannica.com and lds.org

IN THE WORLD: The light bulb is first invented and patented by Thomas Edison.