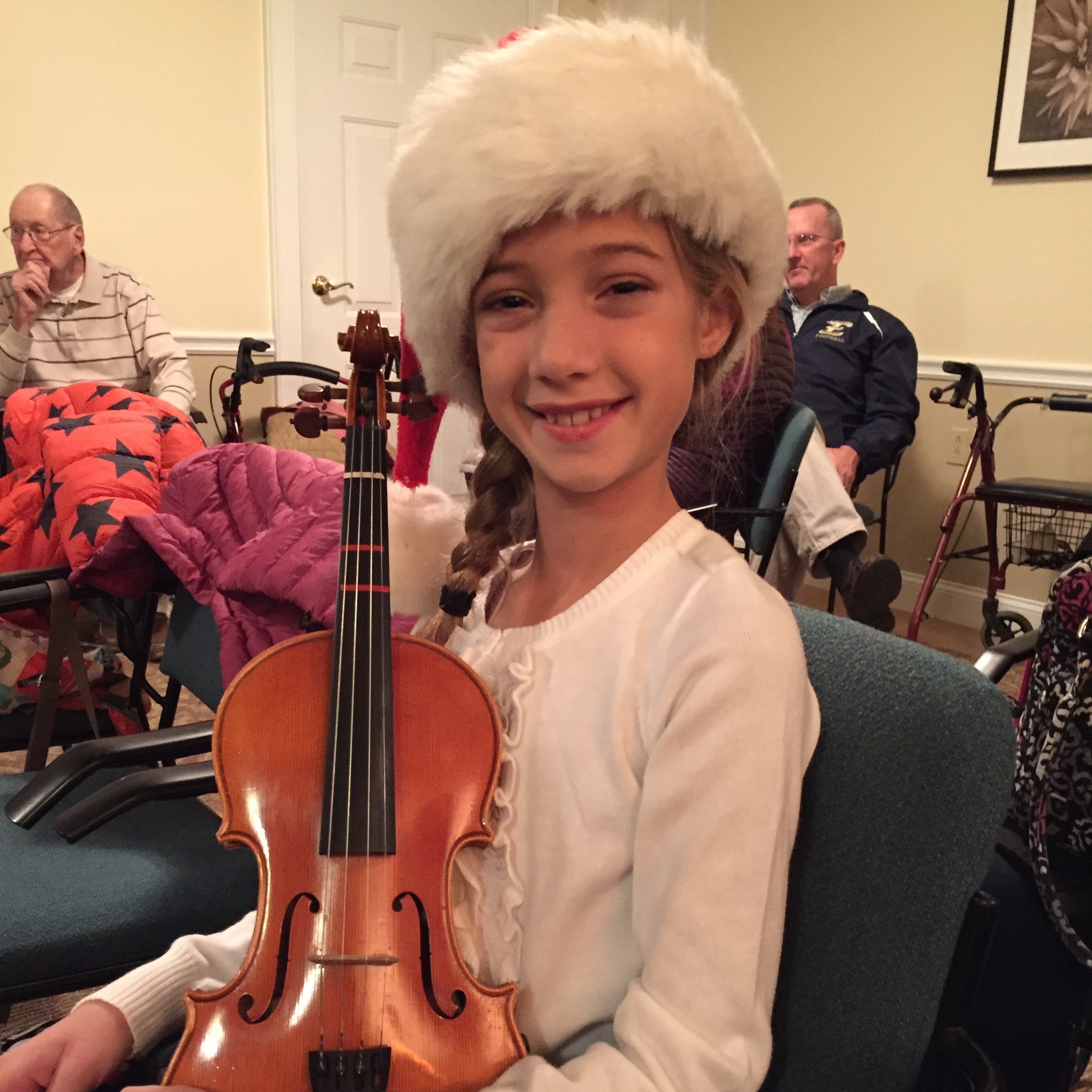 Nine-year-old Sophie Fellows was in the middle her holiday violin concert in Vermont, when suddenly, her head began to throb.

The next day, December 6, doctors told her family the unthinkable—Sophie had a tumor the size of a plum at the base of her brain.

Horrible possibilities of cancer, chemotherapy, and permanent brain damage concerned Sophie’s parents, Chad and Aimee.  How could their little girl endure so much?

The mass would require two 7 ½ hour surgeries to remove and months of painstaking and grueling recovery.  But, even in the midst of this all too real nightmare, the Fellows felt a deep peace that allowed them to see the tender mercies surrounding them.

On the night before her first surgery, Sophie received an unusual Christmas present—two dozen violinists.

Sophie’s violin teacher, Carolyn Bever, and a group of her students braved a major snow storm in order to make the seven hour round trip from Vermont to Boston Children’s Hospital to play a private concert for Sophie and her family.

Wearing a large Santa hat and an even bigger smile, Sophie joined the orchestra in playing their Christmas medley.  Then, came the grand finale.  In a room full of riveted listeners and a deep reverence, Sophie tucked her violin beneath her chin to play the finale, Pachelbel’s Canon, one of her favorite songs.

Over the next three days, Sophie underwent 15 hours of surgery to remove the mass, and during that time, her story began spreading, uniting thousands in faith, optimism, and hope.

“'Pray for Sophie' became our slogan and it soon spread across the US, to China, Ukraine, France, and Italy,” says Chad Fellows.  “We heard of nuns praying for her in prayer circles in Washington, congregations praying and having sermons about Sophie, and people praying that had not for a while.”

Sustained by prayers, the Fellows saw the Lord’s all-encompassing love weaved throughout everyday moments, His love softly spoken through others and through music.  After each surgery, Chad remembers hearing a familiar melody playing in a bakery near the hospital—Pachelbel’s Canon.  Despite passing by this shop numerous times over the weeks surrounding Christmas, Chad only heard that melody those two times, when he most needed comfort.

“Tender mercies were imparted to our family in abundance,” says Chad.  “In the quiet and dark of night I would sit by Sophie's side, taking my turn to watch over her, and feel sustained by angels and the spirit.”

Exhausted and weak, Sophie awakened from her final procedure long enough to give her family a shaky thumbs up before her left lungs collapsed, and she began losing oxygen.  Doctors inserted a breathing tube into Sophie’s throat and transferred her to the intensive care.

On December 15, doctors tried to remove Sophie’s breathing tube for the first time.  Six hours after the procedure, Sophie’s head snapped back, her body contorted violently.  Then she went limp.  Doctors rushed back in to reinsert her breathing tube, but the Fellows were nonetheless shaken and frightened for their daughter.  That’s when the Lord provided another tender mercy.

“Doctors had cleared [the room] and [Sophie] was still,” Aimee says.  “My husband, holding her limp hand that had clutched around his many times, said out loud, ‘I just wish she would hold my hand again.’  And she gave his hand a squeeze.”

Initially unable to speak or coordinate her eye or finger movements, Sophie’s recovery has been a slow journey.  But, doctors found the tumor to be benign, providing the Fellows with another miracle.

“Over the next couple of weeks she communicated with hand signals and expressed a cute personality and sense of humor by showing us "OK" signs and "rock on," one finger for yes, two for no, and the frequent thumb up,” says Chad.

This form of communication prompted some of her friends to start a new Facebook page, “Thumbs Up 4 Sophie,” where people from all over the world can post thumbs-up pictures for Sophie and share their love.

Through everything, Sophie remained optimistic and full of good humor, spending her days creating a board game with her big sister Lucy and rebuilding the muscle and coordination needed to play the music she loves.

“The miracle of Sophie is that while she has been the recipient of so much love, mercy, and healing, she has also been the innocent giver of so much inspiration, joy, and hope,” says Chad.  “Now that Sophie is playing the violin again our hope is that she continues to play her song and finish her concert for many years to come.”

And check out this incredible video of Sophie during her music therapy.

News From Utah Family Prayer Cancer Love FamilyFamily,Prayer,Cancer,Love,Family,News From Utah
Comments and feedback can be sent to feedback@ldsliving.com