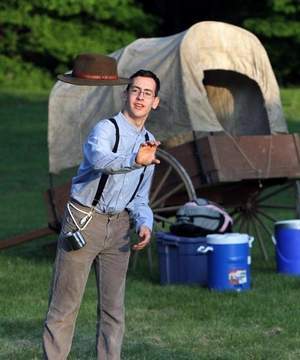 On a recent Friday night when their peers were probably hanging out at the mall or posting on Facebook, some 150 Mormon teens pulled 10,400-pound covered handcarts for seven miles through Connecticut's Mohawk State Forest.

Girls donned bonnets and prairie skirts while boys wore suspenders and straw hats as they re-enacted the treacherous trek Mormon pioneers made out West from 1846 to 1869. Faced with religious and political persecution, about 70,000 members of The Church of Jesus Christ of Latter-day Saints (LDS) migrated across a 1,300-mile trail through five states to settle in the Salt Lake Valley of Utah.

And while the modern-day LDS teen living in the northern suburbs may not know from persecution, the intense re-enactment shows how far their lives can be from the cultural mainstream, even one sprinkled with Mormon touchstones, from the Broadway smash "The Book of Mormon" to Mitt Romney making a second run for the White House.
Read the rest of this story at lohud.com