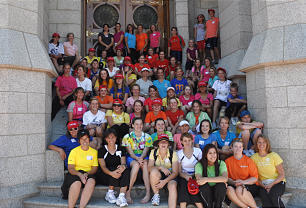 On a windy morning at 3:30 a.m., a group of young women and their leaders assembled at the temple. They had on their running shoes and their smiles, and they were excited about what they were going to do. Their goal was to walk from the Draper Utah Temple to the Salt Lake Temple — a journey of 22 miles.

They took their inspiration from the story of John Rowe Moyle, a pioneer and master of stonework who came West with the earliest handcart companies in 1846. He settled in Alpine, Utah, which was nearly 22 miles away from downtown Salt Lake City. He was called to be a stone mason on the Salt Lake Temple. In order to fulfill his calling and to be to work by 8:00 in the morning, every Monday Brother Moyle would wake up at 2 a.m. and begin his long walk over the hill and through the valley to the temple of the Lord. Like Brother Moyle, who carved the words "Holiness to the Lord" on the Salt Lake Temple, these young women also wanted to keep their focus on being worthy to attend the temple by doing the same walk. They had trained as a Young Women group, individually, and with their mothers and leaders during the summer months. For Mutual activities, they walked and talked about the temple. They followed a training schedule which if they were diligent would prepare them for the 22-mile walk.