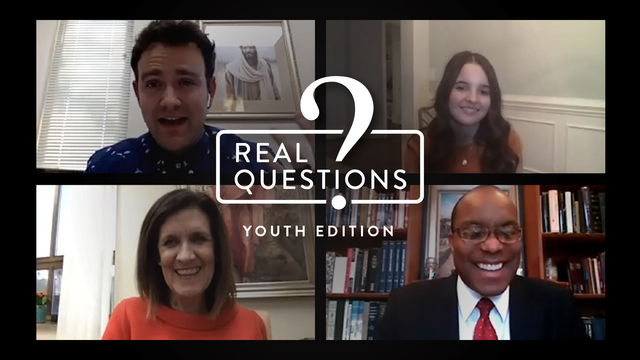 Youth ‘Real Questions’ video: How do I stand up against racism but also be a peacemaker?

As a part of Deseret Book’s youth edition of “Real Questions,” teen Natalie Jones asks for guidance on a timely topic that is applicable to all ages.

“I’ve seen so much division lately, and people are saying and doing things that go against the prophet’s call to root out racism and to be unified. How do I stand up for what I know is right but also be a peacemaker at the same time?” Natalie asks.

“Regardless of what’s going around us, if your motivation is love—love for God and love for others— [then] I think that will speak louder than words,” Sister Craig counsels. “I think, really, if we could see ourselves and see others deeply and as Heavenly Father does, then most problems in our society would fade away.”

► You may also like: ‘Heavenly Father cares about every word’: Sister Craig on receiving the inspiration to write her October 2020 general conference talk

Brother Corbitt invited Natalie to follow the Savior’s example of love, noting that the Savior not only spoke up for what was right but also reached out to those who were unwelcomed by others.

“Jesus . . . went and sought people who felt belittled or marginalized. He was mocked and judged for it, but it was something He did. There is a way to react to someone who is being nasty, and an affirmative thing to do [is] to reach out to others,” Brother Corbitt says.

Sister Craig adds that she looks to Savior’s example as a guide for standing up for what’s right.

“[The Savior] lived in a society that was very divided, but [He] always did the will of His Father and He never compromised,” Sister Craig says. “When you see and hear things that hurt your heart, and you know aren’t right, I think you can defend and speak truth—and when it’s done with love, you can feel peaceful and know in your heart you’ve done the right thing, even if others take it [the] wrong [way].”

Watch the full video and find more from the special youth edition of “Real Questions” on YouTube.