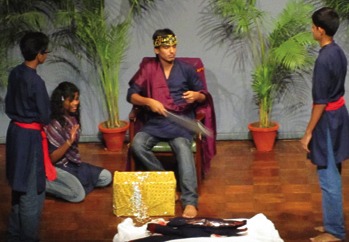 There are only about 8,000 Latter-day Saints in India. But the LDS youth of New Delhi hope they have set the stage for future Church growth by sharing their testimonies in a unique way—a Book of Mormon pageant.

Diane Pritchett of Belmont, Massachusetts, wrote, produced, and organized the pageant. Pritchett was living in New Delhi for the summer so her husband, Lant, who specializes in international economic development, could write a book about India, and so the couple could pick up their son when he completed his mission in Bangalore.

“The pageant had four goals,” she says. “For the youth to have fun, bring the Spirit, share the gospel, and learn how to work hard at a community endeavor.”

“Much of the Church in India is first generation,” explains Praveen Beesa, New Delhi District Young Men president. “Most of our youth only joined the Church one or two years ago, and I can’t express how excited they have been about this project.”

The production, which consisted of both singing and dancing, portrayed nine different Book of Mormon stories, including Nephi breaking his bow, Ammon defending King Lamoni’s fl ocks, and Christ appearing to the Nephites. According to Pritchett, the pageant was created as a missionary tool, as well as a way to strengthen the testimonies of the cast—objectives the youth understood well.

“There are people [who] don’t know about this church,” says Ryckiel Beya, who played Ammon. “That is why we are doing this—to show them that our church is true.” He continues, “Because we have to go through the Book of Mormon, it makes you understand the gospel more deeply.”

On the night of the performance, more than 300 people attended, including fulltime
missionaries with investigators. The youth were also challenged to bring family
and friends.

“The pageant was wonderful,” Pritchett recalls. “Everything went smoothly, so it was a great experience for the participants and the audience, and it was a good production
to boot.”

Riya Sunny, another cast member, is certain that all of their hard work will have a positive impact on the community. “People will think, ‘They are Mormons. Mormons are great.’” And it seems Sunny is right—a few baptisms have already resulted from the production.