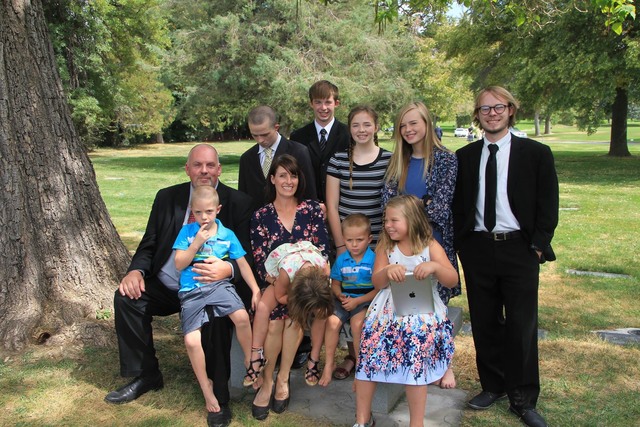 "All In" Podcast: One Woman’s Testimony of Agency After Surviving an Abusive Marriage

When I reached out to April Giauque about the possibility of coming on our “All In” podcast, she responded by saying that she read a blog post I had written about suffering. She specifically cited three quotes from the piece:

1) “Why the heck would anyone want to be a boxer?” And sometimes I feel that way about life. I think, ‘You mean to tell me I agreed to this? I signed up for this experience?’”

3) “I’m beginning to wonder if we are not only supposed to survive the winds and the waves but if we are also supposed to find purpose in our toiling.”

She then said, “These quotes really struck home with me. They fit many of the questions I had as I was going through the abuse of my first marriage.”

After receiving her email, I was so interested to get her take on agency as someone who the victim of someone else’s choices.

Read our conversation below or listen to the entire episode here.

Morgan Jones: In the first email correspondence that we had April, you mentioned that you had read a blog post that I had written about pain and suffering being a necessary part of our mortal experience. And you talked about the idea that of our agency and how important our agency is, what has your experience in surviving domestic abuse, taught you about agency?

April Giauque: Agency is an amazing gift. And it can be amazingly frustrating because each one of us has it. Each one of us is given the opportunity to do what we will with it. And our Heavenly Father is not going to mess with it.

He's going to give you opportunities, he's going to give you choices, you have abilities to do all these things. And he's not going to control anything, because that's what Satan does. Satan, the destroyer, the shame shadow, you know, there's lots of terms for it. His ultimate thing is to control, right? Control and manipulate and gain the glory. Well, Heavenly Father's not going to do that. He's going to allow the agency to be there. And He trusts us. We are from Him. We have this light. And when we act on it, the agency, wow, it's amazing. So I remember my first probably, let's see, I would say we were about four years in, and I had one of those prayerful moments in my walk and talks where I was just so angry with the decisions that my former husband was making, and I was just yelling to the sky like, "Can't us see? Can't you help? We're trying to do all of this. He is doing all of that." I started to divide it into a we and him and we and him, right? And it was very simple. But it was very clear. And it was, "He is my son too. And I'm not going to interfere. That's what you should do." And it was so hard. Because for the longest time, my thinking had been, I'm living righteously. I'm doing all that I can, can't we just get a little reprieve here? And not at the cost of someone else's agency. And that is so hard to accept.

And if we truly trust the Lord, eventually they will make choices that will hinder some of those things and ways for us open up if we are looking for them, but if we're always looking backwards at our shadow and at the pain, we miss them. There might be another opportunity. You might miss it. He might put another one out there. Opportunities are for all. If we're numb, stoned out, drugged out, whatever, we're missing those all the time. But he's not going to put down the roadblock and smack ya in the face and control anything. He'll put the guideposts out there. He'll try I mean, goodness, profits, teachers, bishops, family members, we're all here to be those pinpoints, but sometimes where our focus is we're not able to see it.