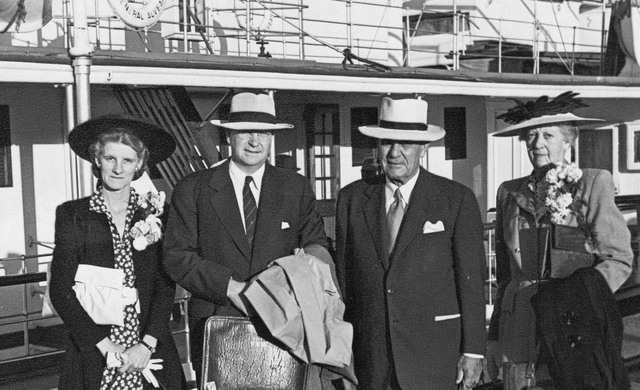 The discovery was a historian's dream.

Clinton D. Christensen and others were sorting through old items in the garage of Lynn S. Richards, grandson of Latter-day Saint Apostle Stephen L. Richards, on a cold November night when they found something that would prove to be a key piece of history for The Church of Jesus Christ of Latter-day Saints in South America.

Among several historical treasures, they found a book of letters written by Elder Richards' wife, Irene, to their children detailing his three-month apostolic tour of South America in 1948, a trip that became a turning point for the growth of the Church in the continent.

Six years later, the book of letters, along with other documents and photos, has been made into a new book — An Apostolic Journey: Stephen L. Richards and the Expansion of Missionary Work in South America (published by BYU Religious Studies Center and Deseret Book) — and a much-needed published piece of the history for the Church in South America.

"It was one of those things where we would say the Lord helped orchestrate this," said Christensen, a historian who has worked in the Church History Department since 2001.

The release of An Apostolic Journey comes at a time of great interest in the South American branch of the Church. President Russell M. Nelson visited several countries there in 2018 and will return at the end of August for another tour that will include visits to Guatemala, Colombia, Ecuador, Argentina, and Brazil. The book also comes one year after Elder Ulisses Soares was called as the first Latin American apostle of the Church.

President Nelson was 15 months old when that Apostle Melvin J. Ballard, grandfather of M. Russell Ballard, now the president of the Quorum of the Twelve, dedicated the continent of South America for the preaching of the gospel and delivered his "Acorn to Oak Tree" prophecy in 1925, the Church News reported.

At the time of Elder Richards' tour in 1948, the Church was in its "infancy in Argentina, Brazil, and Uruguay with some 1,200 members in all of South America and only 200 missionaries," Christensen and Turley recorded in the book.

Much of the credit for getting Elder Richards to South America is owed to Frederick S. Williams, who served a mission in Argentina in 1927 and was later called as president of the Argentina and Uruguay missions. Williams petitioned the First Presidency for years, saying the Church in South America would greatly benefit from a general authority visit, before Elder Richards was finally assigned to come in 1948.

"He's a remarkable figure in church history," Turley said. "Williams was the cheerleader, the one that kept trying to say, 'Hey, something is happening down here, something big, and you really need to come and see it.'"

The Richardses toured and met with members and missionaries in Argentina, Uruguay, and Brazil. The book recounts their journey using documents, photos, newspaper clippings, and other items, which Christensen and Turley hope will give readers a better sense of the history at that time and how the 1948 tour was a milestone in the development of the Church in South America, they said.

Of course, international travel wasn't then what it is today, and Elder and Sister Richards were in their later years. He was also recovering from a heart problem. The three-month tour had his challenges, Turley said.

"Today we attend stake conferences and see church leaders arrive by plane and then ride in modern, air-conditioned or heated automobiles on paved roads," Turley said. "In those days, we've got this couple, both ailing, riding in a jeep over difficult roads through the hills and valleys of Brazil, trying to get places. That's a different picture from what we have today."

While doing research for the book, Christensen spoke to Elder Angel Abrea of Buenos Aires, now an emeritus general authority. He joined the Church five years before the Richardses came to Argentina and remembered their visit as a young man, Christensen said.

"It still meant something to him," Christensen said.

Christensen also tracked down a former South American missionary now in his 90s who had a scrapbook with photos of a family dressed in white for baptism. Along with the photos was a letter from the father of the family, recording what joining the Church meant to them.

"To me, that was a priceless thing to collect," Christensen said. "It's very rare to get the convert's perspective."

Church growth in South America likely increased after the 1948 tour for a few reasons, Christensen and Turley agreed.

First, Elder Richards was in a position to focus attention and resources on that area of the world.

Second, the tour received a lot of media coverage.

Third, there was a shift from having missionaries do everything to having responsibility turned over to local leaders.

A fourth possible reason could be Elder Richards becoming a counselor in the First Presidency to David O. McKay, who became the first church president to visit Central and South America in 1954.

Retired BYU professor Frederick G. Williams, son of Fred S. Williams, was baptized in Uruguay when his father was the mission president. Frederick G. Williams later served as a mission president and temple president in Brazil. They also helped to pioneer the work in Peru. He and his father co-authored From Acorn to Oak Tree, a memoir of their missionary work in South America, in the 1980s.

Frederick G. Williams is grateful to have taken part in such a pivotal chapter in the history of the church in South America.

"It's a remarkable fulfillment of prophecy and such a thrill to have been part of the beginnings of the Church in South America, and to see how the work has spread, just as Elder Melvin J. Ballard prophesied," Williams said.

Christensen and Turley hope An Apostolic Journey will help members to better appreciate the pioneering that is still happening in South America and spark more to be written about the history of the Church there.

"I hope that this book will inspire others to write about the history of the church in South America," Turley said. "There's a lot to be written."

Lead Image: Elder Stephen L. Richards of the Quorum of the Twelve Apostles and his wife, Sister Irene Richards, arrive in Montevideo, Uruguay, and meet Frederick S. and Corraine Williams of the Uruguayan Mission. Courtesy of The Church of Jesus Christ of Latter-day Saints.