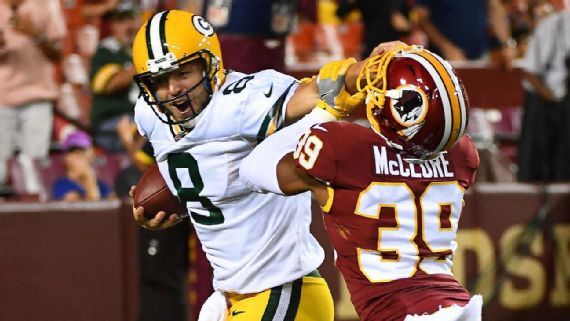 Former BYU quarterback Taysom Hill has garnered plenty of attention for his preseason work on the Green Bay Packers NFL team, including the attention of Aaron Rodgers.

Taysom Hill still isn’t sure how it happened. One minute, the Green Bay Packers rookie was sitting in his seat in the bowels of Lambeau Field, minding his own business and getting ready for another typical quarterback meeting. The next, Aaron Rodgers was commandeering the video screen at the front of the room and firing up a YouTube clip.

“I don’t know how Aaron found it or who showed it to him,” Hill recounted this week, as he prepped for Thursday night’s preseason finale against the Los Angeles Rams -- an opportunity for him to win the Packers’ No. 3 quarterback job. “But one thing led to another and the next thing you know, he’s up on the computer pulling it up in front of all the QBs.”