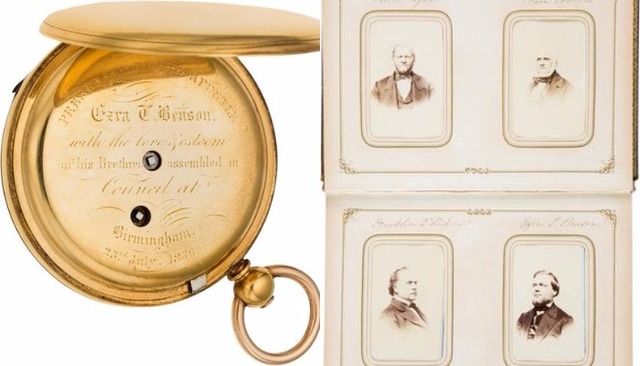 "One of a Kind" 1860s Photo Album of Church Leaders, Pocket Watch Up for Auction

What an incredible treasure in our Church's history!

An 1860s photo album featuring several early leaders of The Church of Jesus Christ of Latter-day Saints and Apostle Ezra T. Benson’s presentation gold pocket watch from 1856 will be up for auction Saturday, Dec. 3, at Heritage Auctions in Dallas.

The photo album includes 100 photos, 61 of which are either photos of early church leaders or photos of Salt Lake City at the time. Photos include early LDS Church Presidents Brigham Young, John Taylor, Wilford Woodruff and Lorenzo Snow as well as several former members of the Quorum of the Twelve Apostles and other leaders such as Orson Pratt, Heber C. Kimball and his wife Vilate Kimball, George A. Smith, Willard Richards, Orson Hyde, Ezra T. Benson, George Q. Cannon and Eliza R. Snow.

Don Ackerman, a consignment director at Heritage Auctions in the historical department, said that while individual photos of church leaders such as Brigham Young show up quite often, an album like this of all the photos compiled together is one of a kind.

“I’ve never really seen anything quite like it,” Ackerman said in a phone interview.