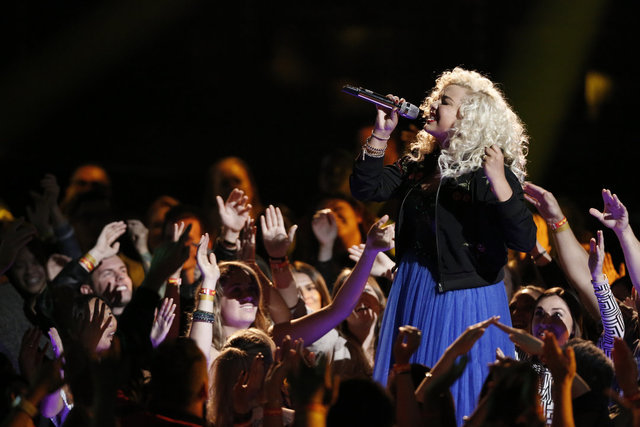 Blake Shelton Raves That LDS 14-Year-Old's Performance on "The Voice" Was the "Best Yet. I Want Everyone to Vote for You"

After making it through the blind auditions, the battle rounds, and knockouts, Aaliyah Rose was voted off The Voice last night during the live play-off rounds.

The 14-year-old Latter-day Saint from Provo, Utah, impressed judges with her incredible voice from the very start with her performance of "Rise Up" by Andra Day.

"I'm not sure the world is ready for this much sparkle," show judge Adam Levine quipped as Stefani chose Aaliyah to be on her team.

During the battle rounds, Aaliyah went head to head with Savannah Leighton to perform "Treat You Better" by Shawn Mendes, which earned a standing ovation from judges Stefani and Alicia Keys.

When she went on to the knockout rounds, Aaliyah was "stolen" by judge Blake Shelton to become a member of his team after a performance of "Like I'm Gona Lose You" by Meghan Trainor.

"You just don't sound like anybody else in the world," Shelton said, adding, "I stole Aaliyah because she’s got this incredible presence. She’s got this old voice—to be only 14 years old, it’s just fascinating to me."

YES YES YES @blakeshelton!! I get to keep Brennley & see Aaliyah make it to the Live Shows! What a Dream! ❤️ #VoiceKnockouts— Gwen Stefani (@gwenstefani) April 5, 2017

After her live playoffs performance where Aaliyah sang "Brass in Pocket" by The Pretenders, Shelton noted, "your singing today was your best performance yet." And added, "I want everyone to vote for you."

However, when it came down to choosing who would move on and who would not, Blake did not save Aaliyah.

"You guys are already doing what you're meant to be doing," he said before making his choice. "You're on the right road."

While she was on the show, Aaliyah says she was able to stand for her beliefs without comprising her signature style.

“Being a singer on the show you have options to wear lots of different styles of clothing. I love fashion and I love being able to show girls that you can dress modestly and still look and feel beautiful,” Aaliyah says in an interview with LDS Living. “I actually wrote a song called 'Inside Out' for the 2014 EFY Mutual CD. This song is about how our beauty comes from the inside out and isn't determined by what we wear or the way we look. We are all beautiful and God made us each perfect in our own way!”

Though Aaliyah is no longer on The Voice, her singing career did not begin or end on the show. Aaliyah has a YouTube channel she started when she was 10 years old with more than 100,000 subscribers and more than 13 million views and is a part of Gladys Knight's choir, the Saints Unified Voices.

Mormon Life The Voice LdsThe Voice,Lds,Mormon Life
Comments and feedback can be sent to feedback@ldsliving.com