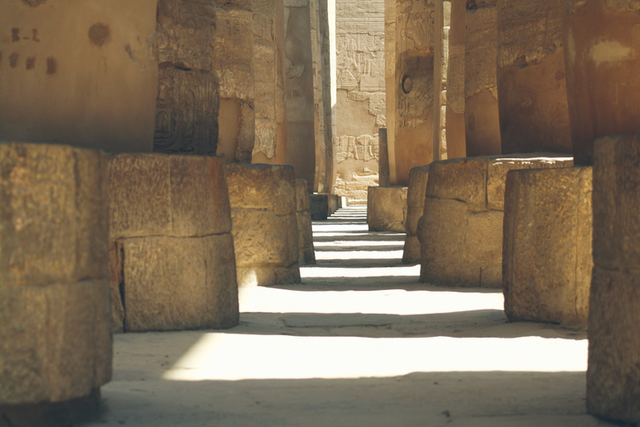 My academic study of the ancient world for the last 40 years has taught me a profound lesson about modern times: Latter-day Saints ought to be the most optimistic of any group of people in history. If we truly understand God’s ultimate purpose behind all that is done in His church, optimism can’t help but seep into our souls. Let me explain.

A few powerful positive themes have emerged from my study of the cultures of the ancient Near East (Egypt, Mesopotamia, Syria-Palestine, Anatolia, Greece, and Rome).

One is the centrality and importance of a temple in almost every culture. Another is humankind’s relentless quest to come into contact with the divine—to enjoy communion with the gods who are worshiped and honored in temples. This desire to commune with deity in special sanctuaries is as old as Western civilization itself. And it’s also a significant desire held by the Latter-day Saints.

Perhaps the oldest documented examples of attempting to commune with deity are the people of Egypt. Unified as a kingdom under a god-king (Pharaoh) around 3000 B.C., ancient Egyptians not only believed they could enjoy communion with their gods but strongly believed that they could become as the gods. Egyptians were obsessed with eternity and eternal life. Virtually everybody after 2000 B.C. who wasn’t a slave thought about eternity.

The ancient Egyptians envisioned two parallel, contiguous time zones, both originating when the gods created the world. One zone was the timeline of the living, in which human beings were born, lived their lives, had their careers, and achieved things, great or small. The other was the zone of the gods, or the zone of eternity, in which everyone lived forever, moved about without temporal or mortal limitations, enjoyed all good things—continuous family associations, including the husband-wife relationship, company of the gods, and the ability to move back and forth between zones to influence mortal activity.

Death was the transitional event and portal through which humans passed in hopes of gaining admission to the zone of eternity. This obsession with eternal life—life with and like the gods—becomes obvious to modern travelers almost everywhere Egyptian culture is displayed with imagery of objects such as temples, tombs, pyramids, and mummies.

Hugh Nibley said, “The commonly expressed goal and object of visiting the [Egyptian] temple is ‘to see the god’” (Nibley, Message of the Joseph Smith Papyri—An Egyptian Endowment, 441). Temples in ancient Egypt were the houses of the gods, as their titles indicated. The most common ancient Egyptian name for a temple was het-netjer, which meant literally “mansion of the god.”

The temple was, in the ancient Egyptian mindset, the location where the gods lived on earth. Thus, temples were also known as “houses of eternity.” As German professor of Egyptology Dieter Kurth points out:

Because the nature of the god had a cosmic dimension, the temple, in its layout and decoration was modeled on the world. . . . Its walls were decorated with plants and animals, representing the earth, the ceilings of its rooms were lavishly decorated with stars representing heaven, and the supporting columns were meant to represent plants and trees.

Every Egyptian temple had this appearance: it was a copy of the world. In inscriptions of the Greco-Roman period the temple was even named “heaven” or “horizon.” The large temple complex of Karnak was known as “Heaven on Earth.”

The temple had to be pure if the god was to accept it as his house. Purity began with the building itself: no noise or impurity was allowed inside the temple. (The Temple of Edfu, A Guide by an Ancient Egyptian Priest, 8)

Egyptian temples thus symbolized man’s ascent to the realms of the gods, and those temples were constructed to literally demonstrate ascending degrees of holiness. As one entered a temple and moved further into its interior, each of the three partitioned rooms was slightly higher than the previous one until one arrived at the holy of holies. (All of this ought to cause us to think of LDS temples.)

Rituals associated with bestowing the power and authority of eternal life were apparently reenacted in ancient Egyptian temples. These included anointing worshipers, who were usually Pharaoh and Egyptian priests, re-clothing them, and taking them to stand before the god or goddess, culminating in a ritual embrace where verbal formulas were exchanged. Carved on temple walls were hieroglyphs that signified the giving of the qualities associated with eternal life. Two of the most common are the ankh symbol (translated as “life” or “eternal life”) and the was scepter (translated as “power and authority”). Frequently, the words are combined to form the phrase, “power and authority for eternity,” which is carved on some temple walls.

To obtain eternal life everyone was expected to live by the principle of Ma’at, roughly translated as “truth,” “justice,” “harmony,” “balance,” and “righteousness.” Ma’at was the standard by which all humans were measured.

The Egyptians believed that every candidate for eternal life would be judged by having their heart weighed against the feather of Ma’at, as a famous scene from Egyptian papyri depicts. A heart as light as, or lighter than, Ma’at was required. Ultimately, obtaining eternal life was a matter of the heart.

Perhaps the most significant effect produced by the Egyptians’ conviction that they could become like and live with the gods is seen in the mood, outlook, and tone of their civilization; it was profoundly optimistic. The ancient Egyptians were confident, optimistic, even self-assured. Though these feelings declined at times after the Old Kingdom, they returned again and again during the Middle and New Kingdoms.

The mood expressed by Egyptian art, architecture, and literature was one of hopeful anticipation of the future. The good things of the temporal timeline would continue, and thus Egyptians had profound reason to be optimistic, serene, and confident even in the face of—perhaps especially in the face of—the trials and tragedies of mortal existence. Theirs was the best of all possible worlds, precisely because they hoped and even expected that the future would be an endless extension of all the best aspects of the present, culminating in reunion with the gods and loved ones in the eternal zone. There are really three main themes of life for ancient Egyptians: family, ascent, and reunion.

This brings us to the present. The parallels, between ancient Egyptian culture and modern Latter-day Saint theology are stunning and ultimately center on the divine truth that human beings can become like deity.

Ancient Egyptians and modern Latter-day Saints affirm that the ultimate purpose of this life is more life. But our theology and reasons for optimism are even richer. As President Gordon B. Hinckley taught, “the whole design of the gospel is to lead us onward and upward to greater achievement, even, eventually, to godhood. This great possibility was enunciated by the Prophet Joseph Smith in the King Follett sermon and emphasized by President Lorenzo Snow. It is this grand and incomparable concept: As God now is, man may become! . . . I believe our Father in Heaven wishes for his children that they might approach him in stature and stand beside him resplendent in godly strength and wisdom” (Ensign, November 1994).

Like the ancient Egyptians, modern Latter-day Saints should be the most optimistic people on the earth. It is no accident that President Hinckley was known for his profound optimism—he understood our destiny. Said he, “I have a strong, uplifting sense of optimism concerning this work. . . . The gospel is good news. It is a message of triumph. It is a cause to be embraced with enthusiasm” (Ensign, November 1995). Perhaps the true significance of President Hinckley’s last sentence escapes us, but in fact, it brings us squarely back to the doctrine of deification and the profound optimistic enthusiasm it should produce in each of us, for the word “enthusiasm” derives from a Greek phrase that literally means, “God in us.”

Learn more fascinating insights into our ability to become like our Heavenly Parents in Andrew Skinner’s To Become Like God, available at Deseret Book stores and deseretbook.com.