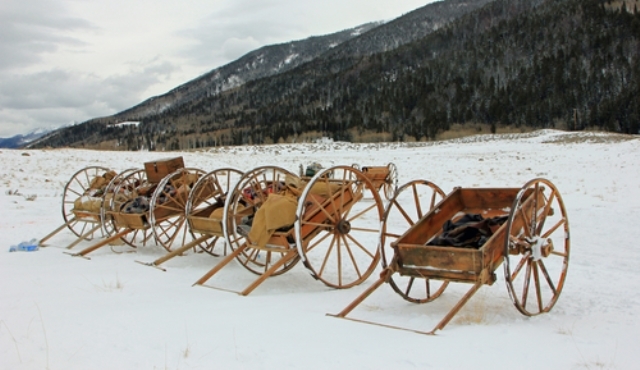 5 Miraculous Stories from the Journals of Handcart Pioneers

Nearly 70,000 Latter-day Saints traversed over 1,000 miles to arrive in a desert land far away from loved ones and civilization, but of those faithful pioneers, only about 3,000 came by handcart. Here are some unique and inspiring stories straight from their journals.

It was July 1856 somewhere in Wyoming, and the Bunker handcart company was running low on food. Twenty-four-year-old Samuel Taylor Orton soon became too weak to pull his handcart, lagging behind the company and asking the Lord to let him die. All at once, he heard a voice say, “Sam, are you here?” He recorded in a journal entry, “I turned around and answered ‘yes’ but could see no one, which surprised me very much.” However, this small incident motivated the young pioneer to get up and keep walking.

He soon caught up with the company but began asking himself just what he expected to see when he reached Salt Lake City. Why was he out here pulling a handcart on this arduous journey to Zion After thinking it through, Brother Orton made up his mind that “if the Father and the Son did appear to the Prophet Joseph Smith and reveal the gospel unto him, and Brigham Young was his lawful successor, I wanted to see the halo of light around his head, like there was around the head of the Savior on nearly all of the pictures we see.” He then put the experience from his mind and pulled his handcart the rest of the way to Salt Lake City.

The Sabbath after he arrived in the valley, Brother Orton was sitting in the old bowery waiting for church services to begin. Looking around to see if there was anyone in attendance that he knew, he saw President Brigham Young walk in. As Brother Orton looked toward the stand, he instantly and distinctly “saw President Young with the rays of light around his head.” At that moment, the same voice that had spoken to him on the plains said, “Now, Sam, if ever you apostatize, here is your condemnation.” Brother Orton recorded, “I looked around me to see if the people heard it, but, I thought they did not.”

While remarkable, Brother Orton’s experience is only one among many powerful witnesses pioneers received while crossing the plains by handcart. Here are more of their stories, written in their own words.

The following experience happened near Fort Laramie, Wyoming, and comes from the diary of Thomas McIntyre of the 1859 Rowley Handcart Company.

“While at prayers tonight, Brother Scroggins indicated that he had something to say. He dreamed that the Saints were murmuring, and that the Spirit of God came upon him and caused him to prophesy that if the Saints did not cease their murmuring, disease would lay hold on them and many would fall by the way. He said about 8 o’clock this morning when we started he was in perfect health, in fact never felt better, till about three hours travel, when he was suddenly attacked with violent pains in his bowels. Yet, he still kept on with his cart. The pain increased and his eyes grew so weak that he was obliged to drop by the way. Here he prayed fervently to the Lord to ease his pains and give him strength to keep up with the company. He tried to remember if he had done anything wrong to incur the Lord’s displeasure. Being alone, he again prayed earnestly with his face to the Earth. He felt now so ill that he thought he must die. He tried to look up but his eyes failed him. All at once the dream flashed vividly across his mind, so he prayed again and said that if it were the Lord’s will he should tell his dream to the Saints, that his pain might leave him. That moment the pain left him and in a short time he was with the camp again as well as ever.”

The following is the story of William Atkin of the 1859 Rowley Handcart Company, as recorded by his granddaughter Luella M. Atkin.

“[Your grandma and I] traveled on until dark and again camped alone. Although we were in Indian country and nearly every white man we met was an avowed enemy of the Mormon people, yet we were not afraid, but laid down and took sweet rest.

“In the morning we started out early and on arriving at the Green River, we found that our company had crossed it the night before and they were gone out of sight. Your grandma and I looked at the river and I said to her, ‘We cannot cross this river alone.’ She replied, ‘No, but the Lord will help us over.’ At these words my heart seemed to leap for joy and I said, ‘Yes, He surely will.’ We then knelt down and in all humility told our Heavenly Father that we were doing all in our power to keep His commandments and to gather to Zion; and now we had come to this river and could not cross it alone. We knew He could help us and we now relied on Him to assist us over. Your grandma and I then pulled our cart into the river, which was swollen; we could see the deep water just ahead of us, but every step we took the deep water was still one step ahead of us, and we landed on the western bank without even wetting the axletree of our cart. Our hearts were full of gratitude to our Heavenly Father for thus again answering our prayers.”

The following account is related by Oscar O. Stoddard, captain of the Stoddard Company—the last handcart company to cross the plains, in 1860. This experience happened near Independence Rock, Wyoming.

“At the first camp this (the west) side of Quaking Asp Ridge, a few teams from the valley passed us and camped a short distance east of us. They came back and spent the evening with us, enjoying themselves as young folks will, till between ten and eleven o’clock, when they started for their camp and feeling jolly, hurrahed, fired off pistols, shouted, etc. The Danish Saints, having gone to bed in a tent and all asleep, being suddenly aroused by the uproar, were frightened, and someone shouted ‘Indians,’ which created a panic, and a rush was made for the tent door to get outside. Brother Christiansen, their chaplain, a small man, lying at the tent door, started to go with the rest, but the rush was too soon and powerful for him, and he was trampled underfoot. . . . He found himself free, but with a shoulder out of joint, with the knuckle below the socket.

“The next morning, one of the brethren, by using his knee as a lever, tried to pull his arm out and pry the shoulder in place. After three or four unsuccessful attempts, he begged him to stop as he could stand the pulling no longer. I was then informed of the circumstance and went to him and found him with his arm in a sling. . . .

“In the evening, just after prayers and as we were preparing for bed, he sent for me to come to and administer to him. I complied and anointed his shoulder as well as his head with consecrated oil, and in confirming the anointing with my hands upon his head, I prayed for the muscles and sinews to relax that the joint may have room to get to its place. After I got through administering to him I said, ‘Brother Christiansen, go to bed and to sleep and if you will have faith you shall wake up in the morning with your shoulder in its place,’ and he said, ‘I believe you, Captain,’ after which I went to bed.

“The first thing I heard in the morning, the Danish interpreter called me and said, ‘Captain Christiansen’s shoulder is in its place as you told him last night it would be.’ And so it was.”

Crusaders of the 19th Century

The following account comes from the diary of Hannah Settle Lapish, who crossed the plains in the Robinson Company of 1860. On April 14, 1910, Hannah, then 75 years old, brought together a group of 50 women at her Salt Lake home at 381 4th Avenue and formed them into a group determined never to forget our pioneer heritage. That organization is known today as the Daughters of Utah Pioneers. This story happened near Fort Laramie, Wyoming.

“Of course it was a dreadfully hard journey and like the other companies, we suffered from lack of food. One day on the journey there was a great deal of suffering owing to the scarcity of provisions. As we were near a trading post, I decided to see what I could do. I left the rest of the company and went to a store where I offered the proprietors my jewelry in exchange for a little flour, which at that time and place was $10.00 per hundred pounds. I soon observed that he was not going to make the exchange and as I turned around I saw a very tall man, perhaps a trapper or a miner, dressed in a beaded buckskin suit standing in the store. He eyed the jewelry which I had in my hand and finally said, ‘What do you want for that thing’ (meaning the jewelry). For a moment, I hesitated and then the answer seemed to come to me by inspiration, ‘Seven hundred pounds of flour, sir,’ I answered. He took the jewelry and sent the flour to the camp. I gave it to the commissary of the handcart company who dealt it out judiciously to the hungry travelers, the last measure, half a pint per person, being distributed on the day we crossed Green River.

“While we were being ferried across that stream a shout of joy went up from our company as the word was passed that a relief train sent by the Church authorities had just arrived with provisions for us. With this relief our main troubles were over and we arrived safely in Salt Lake City August 27, 1860. Our company was one of the last companies to make the journey in that pathetic way pushing handcarts across the western prairies and mountains. We are the crusaders of the 19th century.”

This is only a sample of the miracles, faith, and courage of our pioneer fathers and mothers. They were truly ordinary people who did extraordinary things in the name of the Lord and should not be forgotten. 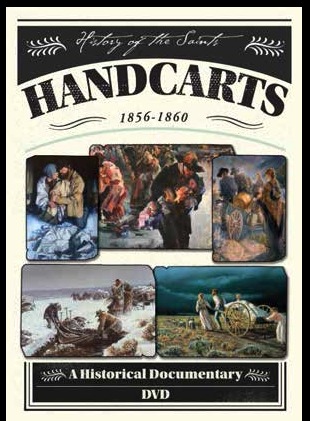 Learn more fascinating stories straight from the journals of handcart pioneers on the new DVD Handcarts 1856–1860: A Historical Documentary. Now available at Deseret Book stores and on deseretbook.com.
Buy now