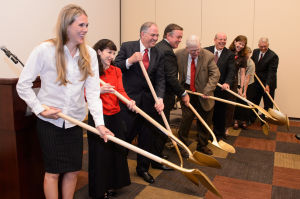 Amidst the thousands of square feet of laboratory space at Arizona State University’s Polytechnic campus in East Mesa, one new building will be constructed to house religion classes and services of the Church of Jesus Christ of Latter-day Saints.

A groundbreaking ceremony for the LDS Institute of Religion building was held Sept. 9, with special guests and speakers, ASU President Michael Crow and Elder Neil L. Andersen of the Quorum of the Twelve Apostles of the LDS Church.

Read the rest of this story at eastvalleytribune.com