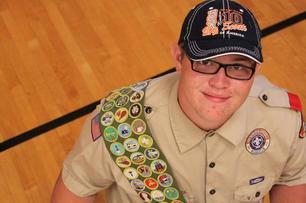 Nate Christensen seems like a typical almost-18-year-old boy. Now in his senior year at Bingham High School in South Jordan, he plays the trumpet in the marching band. He took a longtime friend to the school’s homecoming dance. He loves popular music artists from Justin Bieber to Owl City. He enjoys playing “Just Dance” on his family’s Nintendo Wii and writes a blog in his free time. He admits that his favorite class at school is his sports class.

But two things set him apart. One is that he’s earned 132 merit badges — every possible Boy Scout merit badge he could earn. The other is that Nate is autistic.

Nate's mother, Sandy Christensen, said that Nate tests somewhere in the middle of the autism spectrum. One wouldn’t easily guess that when talking to him.