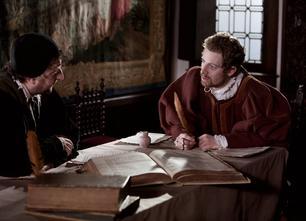 Thanks to the personal sacrifices of many great men and women, the King James Version of the Bible has endured for centuries and continues to have an immeasurable impact and influence on the world.

Yet few know the full story of its origin.

In celebration of the volume’s 400th anniversary, BYUtv will air a three-part documentary series titled, “Fires of Faith: The Coming Forth of the King James Bible,” beginning this Sunday.

he film was produced and directed by Lee Groberg, and written by screenwriter Mitch Davis. “Fires of Faith” chronicles the lives of central figures in the European reformation era, including John Wycliffe, Martin Luther, William Tyndale and King Henry VIII, as well as others, and the events that led to the creation of the King James Bible. The documentary and dramatic feature is told through the eyes of international scholars at prestigious universities and institutions such as Oxford, Notre Dame and the Chief Rabbinate of Israel. Religious leaders from around the world, including Catholics, Evangelicals, Southern Baptist, Eastern Orthodox, Episcopalians and The Church of Jesus Christ of Latter-day Saints, were all invited to share their perspectives and insights in the film.