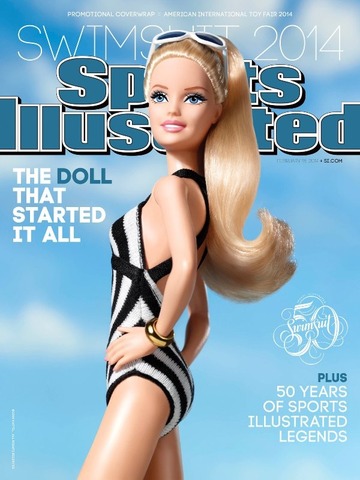 Barbie made a splash this week when she appeared in the 50th anniversary issue of the Sports Illustrated swimsuit edition.

The venture between toymaker Mattel and Sports Illustrated, both of which have been highly criticized for their promotion of unrealistic body images, includes a a multi-page advertising section inside the magazine and a cover-wrap that will appear on 1,000 copies declaring Barbie "the doll that started it all"—an accurate claim since Barbie is often considered the ultimate in unattainable beauty. In fact, if Barbie were a real woman, her proportions would be as follows:

Neck: Barbie's neck is twice as long and six inches thinner than the average woman in the U.S. She would be incapable of lifting her head.

Critics of the partnership complain that a child's toy is being used to promote sexualized images of women. It is the swimsuit edition, after all. But SI asserts it is merely including Barbie in their celebration of legendary beauties—a sentiment echoed by Mattel.

"As a legend herself, Barbie has always been a lightning rod for controversy and opinions," a Mattel spokeswoman told the press. "Posing in SI gives Barbie and her fellow legends an opportunity to own who they are and celebrate what they have accomplished."

So, are these companies right to be unapologetic about this shrewd collaboration? Or do you think they have crossed the line? Let us know your thoughts by commenting below.

Regardless of your opinion, you won't want to miss 8 Tips to Boost Your Daughter's Self-Worth, which offers ways to help your child recognize unrealistic standards of beauty and feel confident in herself.

Lifestyle ,Lifestyle
Comments and feedback can be sent to feedback@ldsliving.com