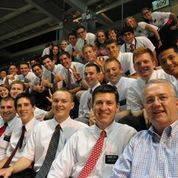 More than 1,300 members of The Church of Jesus Christ of Latter-day Saints in the Washington, D.C., area, including over 400 full-time missionaries and many of their investigators, attended a Washington Nationals baseball game to kick off this year’s regional Day to Serve, a large-scale service event started by the church in the mid-Atlantic region of the United States.

Elder Jack N. Gerard, an Area Seventy, founded Day to Service in 2011 after President Henry B. Eyring, first counselor in the First Presidency, asked LDS Church members worldwide to participate in a day of service to commemorate the 75th anniversary of the LDS Church's welfare program.