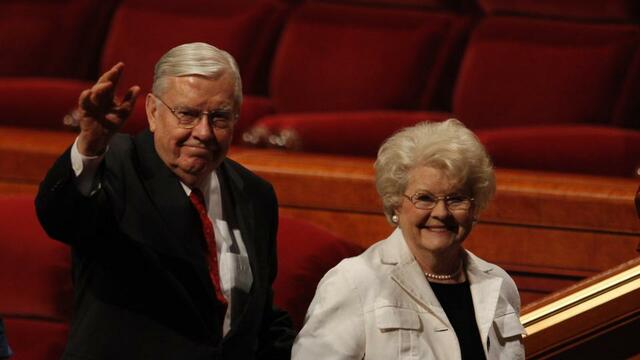 'Every hand flew up': President Ballard recalls support for President Kimball's recommendation that the priesthood be given to all worthy males

On the debut episode of the Church News podcast, President M. Russell Ballard, Acting President of the Quorum of the Twelve Apostles, recalled the moment President Spencer W. Kimball recommended that the priesthood be given to all worthy males. At the time, President Ballard was a young member of the First Quorum of the Seventy and all of the General Authorities were meeting on the fourth floor of the temple for their monthly meeting.

“And President Kimball, I can still see him and still hear his voice saying, ‘We have contemplated and prayed.’ He said, 'I’ve spent many hours here in the temple, and we feel to recommend that the priesthood should be available to all worthy men, and how do you feel about that, brethren?’ And every hand flew up,” President Ballard recalls. He adds “[President Kimball] didn’t call for a vote, but all hands went up.”

► You may also like: How We Misinterpret "Black" and "Curse" in the Scriptures: Insights from an African American Convert

President Ballard, who is now 92 years old, went on to express appreciation for the prophets he has had the opportunity to learn from in over 40 years of full-time Church service.

“President Kimball and the prophets since him molded my ministry significantly. He was my president when I was mission president—he was president of the Church then,” President Ballard says. “So I have a deep affection, and I think learned an awful lot from him. I use his 1974 talk to the regional representatives over and over again. Pure revelation that poured from that mighty prophet explaining our day. You go read it, and he was saying what our circumstances were and what they would become.”

Listen to the first episode of the Church News podcast here.