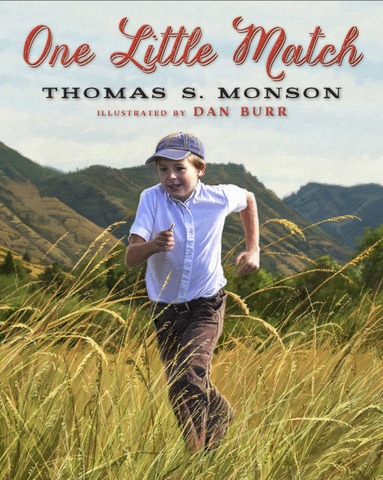 Purpose: To teach children the importance of obedience.

Lesson: Parents make rules to keep children safe—just like God gives his children commandments. And it is important that we follow them.  Sometimes we make mistakes. We wish we didn’t make those mistakes, but it can help us learn that it is important to be obedient.

Share the following story with your children from One Little Match, by President Thomas S. Monson:

When President Monson was a little boy, he would sometimes go camping with his family. One day he and his friend Danny decided they wanted to build a campfire, but first, they needed to clear away the weeds. Young President Monson ran to get some matches to burn the weeds, even though he knew he wasn’t supposed to use them without his parents’ permission.

At first, the small fire young Tommy and Danny built was doing exactly what they wanted—the weeds were quickly burning away. But then they realized the fire was out of control. They had to run for help so some adults could put out the fire. And they also had to confess that they had taken the matches without permission.

Discussion: Ask the following questions and discuss them with your children.

• Have you ever done something you knew you were not supposed to? How did you feel after?

• What can we do when we know we have made a mistake?

Explain that we were given commandments so we can be safe. Our prophet, Thomas S. Monson, said,

A loving Heavenly Father has plotted our course and provided an unfailing guide—even obedience.  A knowledge of truth and the answers to our greatest questions come to us as we are obedient to the commandments of God.

Ask your children to commit to following the commandments and your house rules. Remind them it’s better to be obedient the first time, but also emphasize your forgiving love and the chance they will always have to repent and be forgiven of their mistakes.