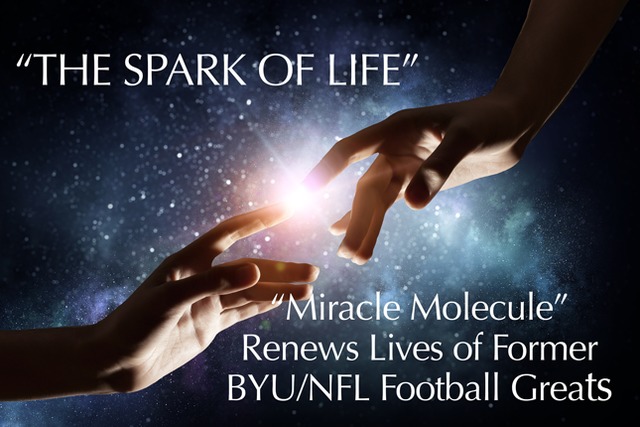 Can This Nobel Prize Winning “Spark of Life” Molecule Renew Your Health and Revitalize Your Life Too?

College and professional football can be a viciously brutal career especially if you’re a lineman constantly being pounded by six-foot five, 350-pound “giants”— as they refer to these huge men in football circles.

Years and thousands of violent collisions with these “giants” takes its toll on players. Multiple back, arm and leg injuries. Crushed bones and torn muscles. Surgeries to mend the injuries so they can stand to play another day. And, of course, concussions.

Jason Buck One of BYU’s Greatest Defensive Linemen
Jason Buck was one of these “giants.” Jason is the most outstanding defensive linemen ever to come out of BYU. In fact, he was the 1986 Outland Trophy winner—the college equivalent of the Heisman Trophy for defensive players. He played seven additional years in the NFL and received a Super
Bowl ring as a defensive end for the 1991 Washington Redskins. 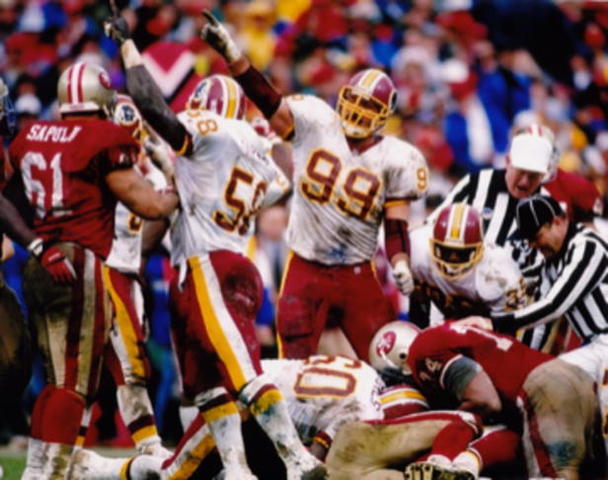 Jason retired after the 1993 season and soon the years of high-school, college and professional football hits and injuries came back to afflict him. Gradually at first but as Jason aged into his forties and fifties his physical and mental life began to crumble. Jason suffered from chronic and debilitating pain, brain trauma, headaches, memory loss and even paralysis.

Jason sought relief from the best medical specialists in the world all to no avail. It wasn’t until a friend and business associate introduced Jason to what scientists have called “the spark of life” or “miracle molecule” that allowed Jason to regain his health and revitalize his life.

The molecule is called “nitric oxide”—not to be confused with nitrous oxide or “laughing gas.” It was discovered by Dr. Louis J. Ignarro, Department of Molecular and Medical Pharmacology UCLA School of Medicine. His discovery was so profound that Dr. Ignarro was awarded the Nobel Prize in Medicine in 1998.

Dr. Ignarro learned when nitric oxide enters a cell it stimulates a process that relaxes and dilates blood vessels. is increases blood flow that delivers life-enriching and healing oxygen and nutrients to your body’s cells. 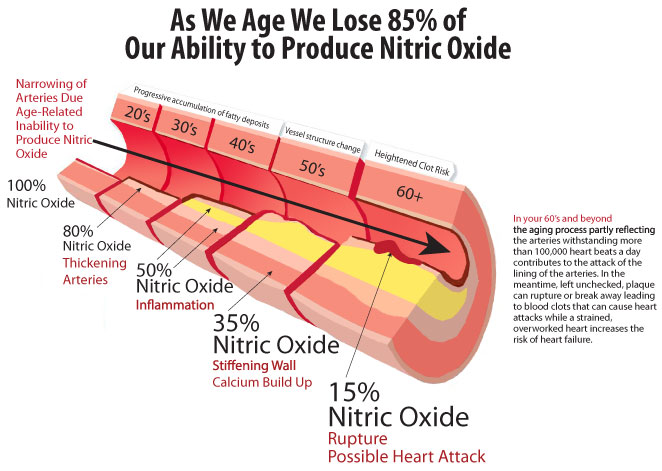 In our youth, our body is awash in nitric oxide. As we get older, especially into our 40’s, 50’s and 60’s+, nitric oxide is reduced up to 85%. This reduction results in most conditions associated with aging—the narrowing and hardening of arteries, plaque buildup, reduced circulation, heart disease, stroke, impaired immune system, chronic pain and soreness, loss of memory, reduced endurance, insulin resistance and loss of energy.

Good News! Nitric Oxide Can Be Activated by Supplementation

The good news, Dr. Ignarro discovered, is nitric oxide can be activated in the aging population by supplementation. Once activated and in plentiful supply, Dr. Ignarro believes not only can the symptoms of disease be alleviated but disease, such as heart disease, can even be reversed through this simple ”miracle molecule.”

Dr. Ignarro believes nitric oxide can age-proof our body, keeping it much fitter than our chronological age would indicate.

“Nitric oxide therapy,” explains Dr. Ignarro, “can make a life-saving difference to your health . . .now we know we can reverse cardiovascular impairment and other diseases naturally—with the body’s internally manufactured ‘wonder drug’, nitric oxide.” That’s exactly what happened to Jason Buck when he was introduced to and went on a regimen of nitric oxide supplementation.

Of course, Jason is not alone in his miraculous recovery. His good friend, former BYU football and NFL lineman John Hunter was near death in a coma due to near total system failure resulting from a surgical infection. While comatose John actually died three times but was brought back to life.

Prognosis: One Year Hospitalization Hooked Up to Machines & Tubes

Once he was out of the coma John’s prognosis was a one-year hospital stay hooked up to machines and tubes to sustain his life. Jason shared his nitric oxide experience with John, John’s harm in giving John this simple nitric oxide boosting supplement.

Out of Hospital in Two Weeks with Prayer, Faith, Friends & Nitric Oxide

Miraculously, John Hunter was able to leave the hospital in two weeks! John believes the prayers, faith, resolve and the amazing healing properties of nitric oxide saved his life and gave him, as an additional bonus, a revitalized life.

To maintain their good health and well-being, both Jason and John today take daily doses of one of the newest and most advanced nitric oxide producing supplement called Cardio Miracle. If Cardio Miracle can continue to revitalize the lives of these former football players imagine what it can do for you.

Why is Cardio Miracle So Effective?

Cardio Miracle, developed and produced by Evolution Nutraceuticals, a Utah company, is advanced because its unique and proprietary combination of nitric oxide-producing amino acids, vitamins, minerals and other natural nutrients.

This formulation allows nitric oxide to be produced faster in the circulatory system, in greater quantity and with longer lasting results than any other form of nitric oxide supplementation.

Dr. Brian Clement, director of the world-famous Hippocrates Health Institute, an ardent critic of supplements, the supplement industry and author of the best-selling book Supplements Exposed believes “Cardio Miracle’s nitric oxide formula and extended delivery is not only profound but it takes nitric oxide supplementation to a breakthrough level never before approached.”

Please Note: Evolution Nutraceuticals is not a multilevel company. It sells directly to the public in order to avoid inflated prices associated with many multilevel products.