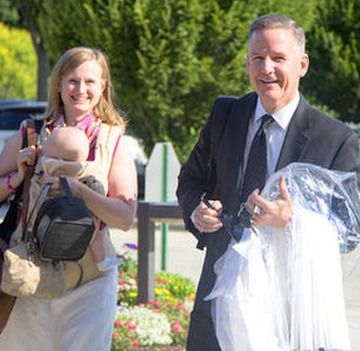 Randy Casto of Lusby, Maryland, grew up wearing a red and white bathrobe and celebrating Catholic mass in his bedroom, offering passionate sermons to his twin brother. The ebullient young man dreamed of a long life of service in the priesthood.

Meredith Carter grew up wearing robes of fear and anxiety in a home hammered by divorce, and, later, abuse. She was raised Episcopalian and, despite her tumultuous childhood and teenage years, held to the promise that God lived and loved her. The hopeful young woman dreamed of a long life of health, happiness and a loving family.

During college, Randy left Catholicism over doctrinal disagreements and soon found a spiritual home in the Lutheran faith. After a decade of study, Randy became a full-time Lutheran pastor and was blessed with a congregation of his own.

Meredith’s spiritual journey also led to full-time ministry and she became an Episcopal priest in 2007. The faith would ground her during an abusive marriage and both a painful and public divorce.

News From Utah Temple Convert Family Faith Conversion FamilyTemple,Convert,Family,Faith,Conversion,Family,News From Utah
Comments and feedback can be sent to feedback@ldsliving.com