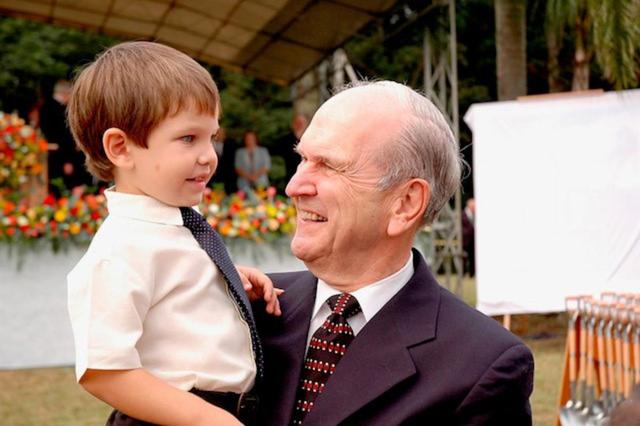 "Who, in seeking the counsel of the brethren, has put their money where their mouth is about who's a prophet?" Elder Holland said. "If we ask for their opinion, are we willing to take it? That's a magnificent quality in my mind. One that I've seen repeatedly in the childlike humility and simplicity of Russell Nelson's faith. . . . He's that humble, he's that childlike, at every level and in virtually every other human relationship that I've seen him in. He's just that pure. He's just that simple in his faith."

As fast as the blood flows into the right atrium of President Spencer W. Kimball's stopped heart, a tube pumps it out of his body and into a machine next to the operating table.

Dr. Russell M. Nelson peers down into the chest cavity. The room smells of cauterized blood vessels and arteries. Not long ago, this was unthinkable. Operating on a live heart was a medical sin when he entered medical school.

The blood streaming into the machine had been returning to President Kimball's heart after a trip through his body. The machine takes over for the heart and lungs. An oxygenator strips out carbon dioxide and delivers oxygen. Then the heart-lung machine returns the blood to the aorta, which sends it coursing to his brain, fingers, and toes.

This is a heart bypass in 1972. Dr. Nelson is one of the procedure's pioneers. His contributions were crucial to the development of the heart-lung machine that now is keeping President Kimball alive.

But this operation is particularly dangerous. He has warned this leader of The Church of Jesus Christ of Latter-day Saints that the risk is extremely high. Nobody's ever tried to stop a 77-year-old man's heart and repair two separate problems before.