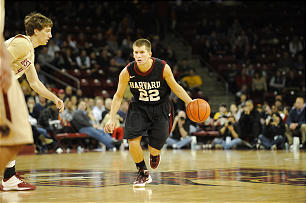 These are strange days at Harvard University. For centuries, the Ivy League school has earned renown for producing everything from U.S. presidents (from John Adams — class of 1755 — through Barack Obama) to computer industry icons (think Bill Gates and Facebook's Mark Zuckerberg).

But the Crimson's reputation on the hardwood is far less illustrious. Harvard has never really been counted among the nation's top basketball programs — or attracted top Latter-day Saint hoopsters. That's all changed this season. The team is ranked in the top-25 (a historic first) and enjoying, at press time, a record of 20 wins against just two losses. Part of the squad's success can be attributed to a lifelong Latter-day Saint who — again, at press time — was waiting for his mission call to arrive and will soon leave Cambridge for two years to serve the Lord.