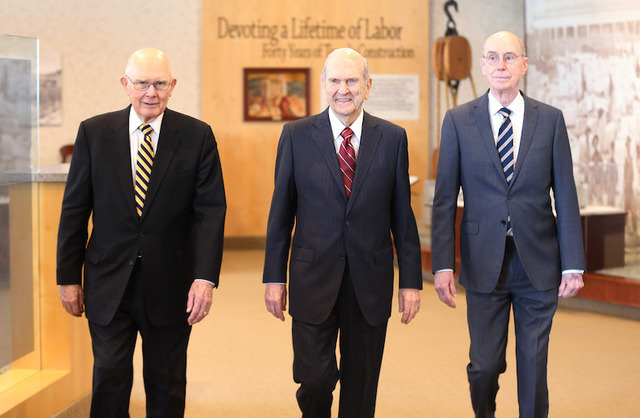 Through the many ups and downs of the last three years, leaders of The Church of Jesus Christ of Latter-day Saints have inspired us with their insight, support, and direction. Recently, Church News shared some of the many ways in which the First Presidency has guided Latter-day Saints since President Russell M. Nelson’s call as prophet in 2018. Here are three articles giving us deeper insight into the ministry of each member of the First Presidency and how they have led the Church with faith during their tenure.

Reflecting on when President Nelson first addressed the public as the 17th President of The Church of Jesus Christ of Latter-day Saints, Church News noted that the prophet has always had “the end in mind.”

“The end for which each of us strives is to be endowed with a power in a house of the Lord, sealed as families—faithful to the covenants made in a temple that qualify us for the greatest gift of God, that of eternal life,” he said.

The article also looks at President Nelson’s preparation, from his career to having traveled to 133 countries to serving in many capacities—including 34 years as an apostle—prior to his call as prophet.

During his time as prophet, President Nelson has met with kings, prime ministers, presidents, and leaders of the NAACP. During his ministry this past year, there were 21 temple groundbreakings, a commemoration of the bicentennial of the First Vision, and other adjustments to keep the work of the Lord moving forward.

► You may also like: 28 changes and announcements made by the Church in 2020 unrelated to the pandemic

President Oaks spoke at the “Be One” event which celebrated the 40th anniversary of the priesthood revelation. He also addressed students at Brigham Young University about “Racism and Other Challenges” in October of last year.

During his most recent general conference address, he spoke on the same topic, saying, “knowing that we are all children of God gives us a divine vision of the worth of all others and the will and ability to rise above prejudice and racism.”

Additionally, in 2019, President Oaks presided over the rededication of the Oakland California Temple and in 2020 spoke to the youth at a Face to Face event.

At the rededication of the Jordan River Utah Temple, President Henry B. Eyring, Second Counselor in the First Presidency, emphasized the importance of unity. In April of this year, he also addressed the women of the Church about being “of one heart and one mind.”

In 2018, President Eyring addressed Latter-day Saints in Seattle, Washington, and Vancouver, British Columbia. During the pandemic, he said in an interview with Church News that the “crucial thing” is to “connect with God” in order to have the feeling that “God is walking with you. It is a feeling of trusting in the Lord, that He is watching over you. . . . The only way to deal with fear is faith.”

When he spoke for the first time in the current presidency during a telecast, President Eyring also stated that there are more wonderful things ahead.

“Prophets in the past have said that the best is yet to come, and it proved true,” he said. “That is so because it is the Lord who leads His Church. He watches over all of His Father’s children in the world and He qualifies and calls His servants to lead, inviting God’s children to come home in heaven to Him.”