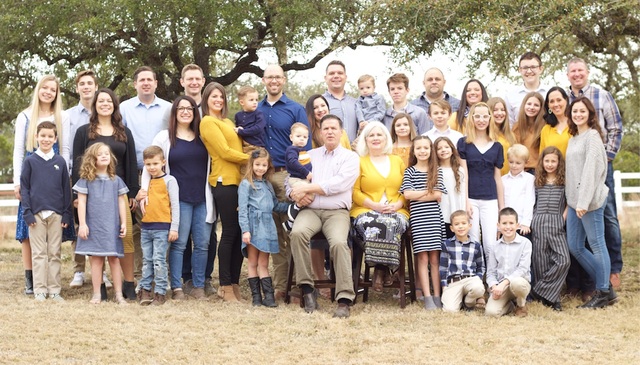 Randal Wright is a beloved author and speaker. He is also a lover of stories. If you’ve ever talked with him or heard him speak, you likely noticed how frequently he references his life experiences, either his own or someone’s else’s that he has learned from. But what is his motivation for sharing stories?

On this week’s All In podcast, Wright explained his love for stories by telling his own life story.

Listen to the whole episode here or read a full transcript here.

Morgan Jones: I think that we are both lovers of stories, and so my first question for you is, why when you teach—so you have this long history of teaching and helping people, and many times you do it in the form of stories—so why do you like to teach in stories?

Randal Wright: I got drafted in the Vietnam era, and it was two missionaries per ward per year, I wasn't one of them at 19. They said, "Greetings, you're now inducted." And it was a rough time. I remember that I thought a few times that one-third of the hosts of heaven got sent to timeout and they sent them to the army to be with me. But the drugs, immorality, the profanity, and I didn't have a testimony to go with it. So it was a dangerous time, a very dangerous time for me, and I was at a crossroads. So, do you have no friends? Do you go with this? And my mom sent me—I knew she was home praying for me—she sent me a book about Joseph Smith, and I read that and it just did something to me, and I finally read the Book of Mormon with real intent. Not 1 Nephi chapter 1, over and over. It was real intent, and I started to gain a testimony of that. Well, I got out of the military. You have a six-year commitment: two years active, four years of reserve. But I kind of didn't know who I was, I was starting to gain a testimony of the Church, and I saw this ad in a paper for a Dale Carnegie course. And I thought, "That's the last thing I want to do is take a public speaking thing," but it just wouldn't go away. I just kept having that feeling. So I talked to the guy, he came out and saw me, told me how much it costs. It was very expensive, and I thought, "Well, I don't want to do it anyway, and now it's expensive." But for some reason, it just kept going, so I signed up for that. It was terrifying the first night because everybody in there was much older than me. There was only one guy there that was even close to me as far as confidence, and that was Calvin. Calvin was a bread truck driver. Everybody else was either CEOs, vice presidents, top salesmen—I mean, these guys were professionals already. They were just looking for a way to present better.
So the first night, I remember Calvin with his head down, "My name is Calvin," and he told his last name, and I thought, "Man, he's got as much confidence as me: zero." But anyway, time went on and the leader said, "If you want to give a good presentation, you have to give something you're an expert on and you're passionate about." Okay, I don't know. What am I an expert about? Nothing. And not real sure what I'm passionate about. He says, "So what you need to do is tell your personal experiences—you're an expert in that, and you're passionate about some of those experiences." And I thought, "Okay." So I watched it over time, we saw people get even more confidence, and Calvin started to come out of it a little bit. In our last talk, we had talked about anything we wanted to do—anything we wanted to—and I couldn't come up with anything. I was just totally blind. And that was our final presentation. A little voice said, "Why don't you talk about Joseph Smith and The Book of Mormon? You're passionate about that now." And I go, "There is no way I would possibly talk about Joseph Smith and The Book of Mormon to all these non-Latter-day Saint executives." (There was a leading salesman of the largest beer and wine distributor in Southeast Texas and such.) I just said, "There's no way." But nothing came, and the night of, I actually brought a case of copies of The Book of Mormon, just in case I had the nerve to get up there and do what I felt I should do. I had nothing else. I literally was trying to think of something else right up to the time, and I couldn't do that. I get out there, talk about Joseph Smith and The Book of Mormon—passionately, for me. Anyway, I finished, and I thought, "I'm gonna get blasted for doing this. I know it's totally inappropriate to have done that. I might get blasted." The next guy, of all people, was Jerry, the leading salesmen of the beer and wine company. Why him of all people? He gets up there and he says, "I had a talk prepared, but I'm not going to give it because the last talk reminded me that I'm not doing what I'm supposed to do. I'm a member of The Church of Jesus Christ of Latter-day Saints, and I haven't been active. I need to go back to church and I just want to tell everybody, I'm going back." And he went and sat down. And I went, "Whoa." Long story short was, I gained a new testimony of following promptings.
Later, Jerry and I, with our wives at that point, lived next door to each other at BYU. He did quit his job, went back, and got a master's degree in social work, and we later served in a bishopric together. So I just thought of the Dale Carnegie course where something you're passionate about—you're passionate about experiences that you either observed or happened to you or really affected you.

Then, we're married, I'm at BYU, my wife goes into labor with our first child. There's nobody there, no family and those kinds of things. She was in labor for 35 hours. Bottom line is, [the] doctor said she needed an emergency C-section. I wasn't really sure what a C-section was, but they asked if I wanted to give my wife a blessing. It was at Utah Valley Hospital in Provo. So I gave her a blessing, they wheeled her off and said, "Just go down to the waiting room and wait, I'll let you know." It seemed like forever. I can't remember how long it was, it was a late night, but in that room, let's just say you remember to pray in those situations. And so I prayed, and I remember promising—I don't even know where this came from, maybe the Dale Carnegie course was the only thing that hit me—was I promised the Lord that I would look for important lessons from life and I would record them, and if I ever had a chance, I'd share them with other people. So that was the promise. I can say that my wife was okay and my son was okay, but I had a commitment and I've tried to keep that.

Institute Ces All InInstitute,Ces,All In,
Comments and feedback can be sent to feedback@ldsliving.com