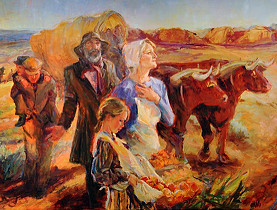 How the Swiss founded a Mormon town

Ask just about anyone from Santa Clara, Utah, about “the call” and there’s no mistaking what you mean: The time the Swiss Mormons rolled in and changed everything.

In fact, there was no real town to speak of in this remote corner of the American southwest before the Stuckis, Hirschis, and Toblers—some 85 Swiss pioneers in all—unloaded their covered wagons and began to build.

The epic journey the Swiss pioneers began 150 years ago this spring has now been immortalised in a mural hanging in Santa Clara’s Town Hall. Two documentary filmmakers are making a movie, having followed Utah artist Julie Rogers around as she put paint to history, using today’s descendants of those Swiss pioneers as models.

“The Swiss were the ones who made Santa Clara into a town,” said Kathleen Nielson, chair of the local heritage commission. “There was nothing in town to commemorate that.”
Read the rest of this story at swissinfo.ch