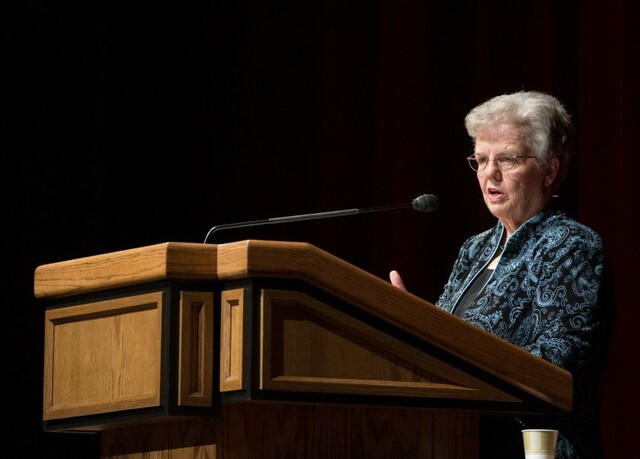 In receiving this award, Perry joins the ranks of many influential recipients in the past, including President Russell M. Nelson, Sandra Day O’Conner, J. Willard Mariott, and Margaret Thatcher.

According to BYU News, Perry has written 3,000 original songs, produced 108 albums, and composed two full-length musicals in addition to performing musical firesides and sacred cantatas. But of all her works, Perry, age 81, is perhaps most recognized for her beloved Primary songs such as “A Child’s Prayer,” “I Love to See the Temple,” “I’m Trying to Be Like Jesus,” and “We'll Bring the World His Truth.”

During her commencement address, Perry spoke of her love for BYU. When she attended the school, she was conflicted when choosing her major because she “loved sports and music equally.” In the end, it was her mother who convinced her to study music education as it “would be more of a lifetime pursuit.” Perry met her husband, Douglas, during her second year at the university, after which she focused on raising their family.

Despite her musical studies in college, Perry didn’t start writing music until she was around the age of 40.

“When I started to write it was exhilarating and I wondered why I hadn’t thought of writing sooner,” Perry said in her address. “I was hooked, I knew at that point I wanted to write music.”

Perry has also received national attention with her song “Heal Our Land,” which was performed at the Inauguration of President George W. Bush in 2005. The song was also performed on the Oprah Winfrey Show following 9/11, and other of Kapp's songs have been sung by Gladys Knight and Brooks & Dunn.

Through it all, though, it was the “love of the Saints” that motivated Perry to keep writing music about the gospel.

“I am humbled and most grateful to receive such an award from this university, which I have tried to honor throughout my life by using my two years here as a music major as a springboard for adding to the music of our faith throughout the world,” Perry said in her commencement speech. “I consider it a culminating event in my life.”

Byu PrimaryByu,Primary,
Comments and feedback can be sent to feedback@ldsliving.com