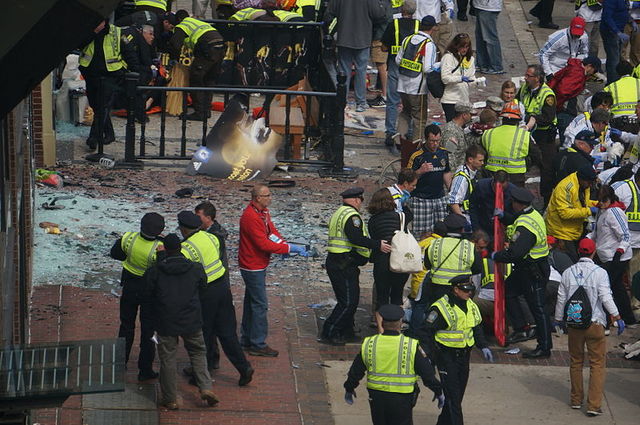 Cell phones and VIP passes convinced Heather Ekola and her husband Josh that they had been uniquely blessed by the Lord in helping to be preserved from the savagery of the Boston Marathon bombings.

The Springboro, Ohio, couple was among many Latter-day Saints participating in Monday’s world-renowned race who found themselves safe after the worst attack on U.S. soil since Sept. 11, 2001—many of whom attributed their fortunate condition to divine blessing.

The twin blasts on Monday killed three people, including an 8-year-old boy, and sent 183 others to the hospital, some of whom were marred by bombs loaded with ball bearings and nails. Thirteen had limbs amputated, according to hospital officials.

In her nine previous races, Ekola wouldn’t have felt her phone vibrating 24 miles into the 26.2-mile marathon because she had never brought it. But for this trip, for some reason she decided to take it. And just a couple miles shy of the finish line, her phone was suddenly bombarded with 204 new messages.

Two blasts, resulting from heavy devices made out of pressure cookers in dark-colored nylon bags, had just exploded--just across the street from where her husband was, and exactly where he should have been.

The only reason he wasn't there was because Ekola and her running partner, Libby Brown, had unexpectedly been given VIP passes that morning by a manager of Team Hoyt—the charity group supporting Dick Hoyt, who has pushed his 51-year-old quadriplegic son Rick in some 1,000 races across the country.

Josh is adamant that had he, along with Brown’s husband, Brian, not used those passes, he would have found himself on the wrong side of Boylston Street Monday afternoon. “I am a firm believer that everything happens for a reason,” he said. “I don’t know why and how everything that day unfolded, but I’m very grateful that not more people were injured and I pray for those that were, and their families.”

Ekola, who met up with her husband after running 10 more miles (for a total of 34) after being rerouted through the city, mentioned President Hinckley’s injunction that fear and faith cannot co-exist. “What happened is shameful, it’s wicked, it’s cruel, it’s pure evil in its truest form. But I feel very blessed through all of it,” she said. “This will not dampen people’s spirits. People will mourn and people will grieve, but you can do anything you set your mind to do. . . . Whatever it is, you have a choice: you choose to sink, or you choose to swim.”

Shelley Coutu hadn't trained as well for the race as she should have, and the Cottage Grove, Minn., resident had traveled 25.5 miles before finding herself stacked behind about a dozen people near Massachusetts Ave., where the trail begins to bottleneck normally. Coutu believed someone had fallen, and posted to Facebook asking about the holdup. That was how she learned what had really happened.

“Then I heard big bangs,” she said. Texting hardly worked because of the suddenly heavy traffic load, and individuals began to cry and panic after finding legitimacy in the word “bomb” permeating the crowd.

“Once that hit me, I was a bit stunned and didn’t know what to do,” she said.

After managing to take a taxi to meet her husband at their hotel, she realized that running at her normal speed would have placed her at the finish line exactly when the bombs exploded near the finish line. Her lack of preparation for the race had possibly saved her life.

“I feel like this was in the works for a long time, like that’s how it was supposed to be,” she said. “This has certainly helped me realize that the picture is much broader than I ever knew. Things just get put in place months and years in advance, and you are just watched over.”

Coutu said she doesn’t know why she was preserved and others weren't, acknowledging a scripture from the Savior’s Sermon on the Mount that our Father in Heaven “maketh his sun to rise on the evil and on the good, and sendeth rain on the just and on the unjust” (Matt. 5:45). But she is grateful nonetheless for factors in life magnified by tragedy.

“It makes every moment a little more special, a little more important,” she said of the influence of Monday’s events. “You realize how many people you influence. My phone wouldn’t stop ringing with well-wishes. Even though it’s been a tragic event, it’s made me feel more trusting in mankind, with so many good people.”

Scott Keate said he gained the same perspective. The Highland, Utah, resident was actually in the tented area following the finish line, waiting for his mother to complete the race, when the bombs went off. He was touched by an African-American woman who approached him near the city’s famed Freedom Trail, offering her home and other resources to the visiting athletes.

“We saw the best of Boston before and after the explosion, and that spirit was only heightened after the event,” he said. “It was unique to feel so many people wanting to offer services the way they did. Really, it brought a feeling after the fact. The only word that comes to mind is reverence. There was a sacred feeling in Boston. A lot showed up in prayer and spent a little longer in churches.

“It was quiet—probably more quiet than it usually is."

LDS Living received several tips of more than 20 Latter-day Saints who were in or involved with the Boston Marathon at the time of the bombings. You can read about a BYU student who was there or two other Mormons' experiences as well.