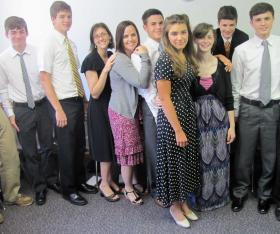 You may have seen the viral anti-bullying Mormon Message circulating on Facebook. Since it was published on YouTube in February, it has received more than 700,000 views.

The video, called “Bullying — Stop It,” follows two groups of high school students — a group of males who send a hurtful text around school and two bullying victims who are affected by cyberbullying.

Last week, one local LDS congregation hosted a youth fireside to watch the anti-bullying video and discuss the motivation for treating others with kindness.

Bishop Joseph Thompson of the Savannah Ward congregation began the anti-bullying conversation by asking the group of 12- to 18-year-olds what their motivation is to be nice.

Read the rest of this story at savannahnow.com